If this was a “lifestyle” blog, or a design blog, or anything other than what it is, which is random “Here are the thoughts and events in my life blog,” then I would probably not share this with you. But as it is said diverse cocktail of beauty and pain, success and failure, I give you our Labor Day.

Which falls more into the failure category, in one sense, the one in which our main goal was not achieved.

We had dinner with some friends Sunday night – the awesome sort of dinner where you all show up in your “house clothes” and potluck it up so no one has to do lots of work – and sometime around midnight James proposed that we get up early and bike to the Lincoln Memorial to watch the sunrise. Obviously, that sounded like a perfect moment, the type that I love in theory as much as in reality. I premeditated telling people that we had ridden to the Lincoln Memorial, watched the sun rise, and then biked back to Ted’s for some breakfast, beating the crowds and scoring a table with no wait, which is the very definition of bliss. Then, because we had gotten up early and been invigorated by our sporty bike ride and yummy breakfast, we would proceed to be productive and energetic all day long, doing lots of the things that we hadn’t done all summer.

But you know the tricky part about sunrises? It’s dark when you go out for them, so you don’t know until you have already trekked out somewhere and given up sleep whether or not you will already get to see the sunrise or whether you will just see some clouds grow bright.

Which brings us to this, our much anticipated sunrise.

The clouds only covered the horizon, only obscured the exact sky space necessary for a beautiful sunrise, but we devotedly sat sweating on those steps until it peaked over the top in bright yellow, definitively not sunrise-like rays.  Lincoln Memorial Sunrise, you sneaky trickster. We could have slept in, could have trekked over to Ted’s with bright eyes and well rested souls, could have eaten breakfast in bed at 11 after 10 hours of sleep. But instead, we were there on the steps, staring out at a standard grey sky and swatting mosquitoes off our sweaty arms. 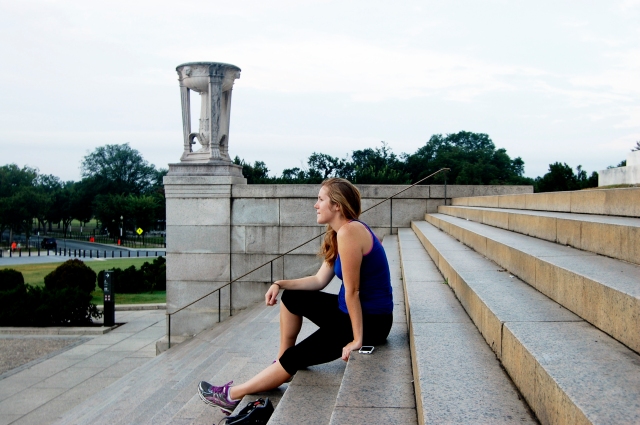 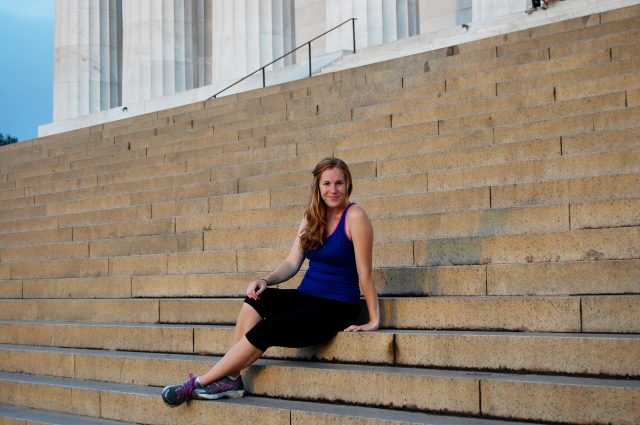 But I don’t actually regret it at all. I don’t regret biking down the Mall without speaking or seeing a single soul. I don’t regret gliding through the city beside James and feeling like it was our own private place. I don’t regret spending an hour sitting beside James on the steps, barely speaking, just gazing out at those gray clouds. Yes, it would have been better with a sunrise – come on, I’m not going to pretend otherwise. It would have totally rocked to have the sky turn crimson and gold while we sat there on those iconic steps and held hands and sighed those special newlywed sighs (yes, I still count us as newlyweds). But I am not going to let that better rob me of the very profound good I got to enjoy in my failed sunrise viewing.

Plus, since I wasn’t distracted by the awesome view, I made James take these selfies. He was too sleepy to resist, though he will most certainly object to the fact that I just called them selfies since it is one of the words he refuses to use. (Total unrelated sidenote: feel free to chime in on my ongoing existential struggle over whether I should get bangs again or not, as that second photo gives you unrestricted forehead access.)

And after our sunrise fail? I would like to say we ate at Ted’s then spent the rest of the day as invigorated and productive individuals, but that would be a lie. We totally went straight home, dove back into bed, and slept till noon. By then the line at Ted’s was too long so we ate sub-par brunch elsewhere, spent a good part of the afternoon in a frustrated search for doughnuts, and finished the evening with a 24 marathon and slice and bake cookies dipped in milk.

Yes, it technically could have all been better, but that doesn’t make it any less good.

This entry was posted in Uncategorized and tagged DC, fail, sunrise, weekend fun. Bookmark the permalink.