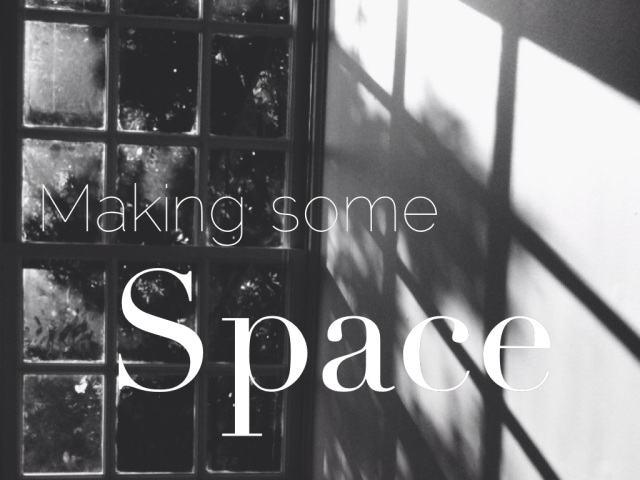 When I was little, my mom would throw away our stuff. She has always hated clutter, and no one amasses clutter like kids. If you stopped playing with something long enough, if you fell out of love with a hobby, if you maintained that an item of clothing was your favorite long after it was too small, my mother would dispose of it. One time I went on a mission trip and came back to find she had sold my bike (“You hadn’t ridden it in a year!!”) and another time I came back from camp to find my purple metallic shiny bike shorts were GONE and she still insists that she had nothing to do with that (“Though they were too tight, so it’s probably good that they disappeared.”).  But after the initial shock, my brothers and I pretty much moved forward and didn’t think about it much more. Because stuff is after all, just stuff.

When I moved to Paris after college, I could only take two suitcases for the whole year, which was good, as I only had ten square meters of space. What I found was that I only needed two suitcases, that I still had clothes that I never wore, even though I had pared down my wardrobe to the “absolute necessities.”  I actually liked how little possessions could claim me that year. I liked trying to make a creative or new outfit with the smaller selection I had. Because clothes are after all, just clothes.

All the TAs share an office on campus and this summer we got an office makeover with new paint and a deep cleaning. In the process we threw away boxes of stuff, but somehow there is still more clutter now that we are moved back on. I usually work late Friday afternoons along with another woman and sometimes – if we are getting overwhelmed about school – we just start throwing away stuff. Out with old presentations, out with outdated books, out with stuff that has been there inexplicably for years. And afterwards… there is room to breathe a little easier and a renewed sense of productivity.  Because all that stuff was just forgotten excess, taking up space and cluttering our minds as well as our visual spaces.

Our apartment is small. Not tiny, especially not by city standards, but there is no extra storage. No garage, no attic, no spare bedroom or extra closet. Everything has it’s perfect space, has to have it’s perfect space or there just isn’t room. Still, it is human nature to amass more than we need, to stack up stuff and think we need it.

In case you haven’t been able to tell, this semester, especially the past month has been a little rough. Between James’ job and my school and teaching, we are constantly busy. We are always rushing, always struggling to get out of bed, always trying to squeeze things in and failing. It hasn’t all been bad, but it has certainly been too full.

Which is why this morning, instead of starting on the endless to do list I have, I decided to make a little more space in my life. I tossed out so many pairs of shoes, several purses, a couple pairs of pants, a dress, a skirt, a coat, and so many shirts. I threw out my latest dead plants, and last night I dumped out all the stuff that needed to go in the fridge. (Which, ok, ended in me baking zucchini bread at midnight because I didn’t want to waste zucchini.) I tossed out old newspapers, magazines that we have read, and random papers that have piled up without purpose or explanation. And it feels so good.  Because stuff isn’t inherently wrong, but it can become controlling.

I think that sometimes our minds get so full that we feel claustrophobic in them and something has to go, thus we turn to our spaces. Technically, that’s not logical, as clearing physical space doesn’t equal cleared mental space. But the human soul defies logic and there is a freeing feeling in space, in simplicity, in room to breathe. There is freedom in throwing out the needless and trimming back the excess. We are impacted so much by our spaces that clearing a physical space instantly translates (for me at least) into clearing mental space.

And in this freedom, I feel so thankful that our small space forces us to continually ask if we have more than we need. I know I have already written about the effect that small spaces have on hospitality, but here I am just talking about the effect they have on us and our priorities. I am so thankful that we are starting our married years small. We are learning – by necessity – to be happy with little. I love knowing that we could pack every single one of our belongings in a pretty small Uhaul and roll out on an a new adventure if we had to. We are learning to be free from stuff. We are learning to fill our lives with friends, laughter, ideas, love, and experiences, instead of stuff. We are living in the constant practice of making space to breathe.

Anyone else been clearing some space lately, or needing to?

PS: I absolutely loved this post on a similar topic.

This entry was posted in Uncategorized and tagged apartment, confessions, daily life. Bookmark the permalink.

33 Responses to Room to breathe.