When you really love someone, you have to take up the causes they think are important…

…which sometimes means attending multiple baseball games in one weekend, with a newborn, in million degree heat, because the Pirates are in town and we turn out for James’ team.

I remember feeling a little daunted when we found out we were having a boy, a little left out of the more feminized mom culture. I wondered if having a baby boy would be as fun as a little girl, if it would feel as much like I had a little sidekick.

I was so stupid. The wonderful thing about babies, is  that I’m pretty sure that everyone ends up being thrills with what they end up having. If we had had a girl, I know I would be GUSHING. But as it is, I could not be more pleased with my baby boy. I was texting with my friend Fran who also recently had a boy, and I told her that I felt like having a tiny boyfriend that you are obsessed with and everything he does is perfect. When I go out with Henry, I feel like I have my big strong boy there to protect me, which is RIDICULOUS, since he can’t even roll over yet, and I am pretty capable of protecting myself and resisting gender stereotypes. BUT STILL. My hormonal feelings know no logic.

I know that if we have a daughter someday, I will absolutely melt over watching James interact with her, but for now seeing him with Hank is my favorite thing. My boys,doing guy stuff. The Pirates came to town a couple weeks back, and we made sure to hit 2/3 games — only missing the third because of a rain delay that moved it back further than would be enjoyable with a baby who is slowly developing a more solid bedtime.

Of course, I can neither confirm nor deny that the entire weekend wasn’t just so that Henry could wear his entire array of Pirates gear that one of my students gifted him. (CONFIRM). In general, I am not a fan of baby boy clothes with lots of logos or words on them, but I make an exception for fanware so that we can all match, because massive groups of people matching and experiencing excitement in unison is maybe my favorite thing — no impulse for individualism over here.

There is nothing more summery and perfect to me than the ballpark on a Sunday afternoon. I ate lots of hotdogs and fries and just felt so darn American all weekend long. I also reveled in the glory that is the nursing mothers room at Nats park. IT WAS MAGICAL. AC! Tiny curtains you could pull around your plush chair while you watched the games! AC! Clean changing tables! A to the C! Samples of various products! AAAAAA CCCCC! Getting to it sneaks you into the posh area of the stadium and no one notices if you don’t leave ! THAT AC THOUGH!

That logistics of a baby at a ball park are something we are slowly mastering, as we have now [mostly] successfully done three games. We found that wearing Henry was vastly easier than any other sort of carrier, and I also brought a bottle for easy stadium feedings if I didn’t want to trek to the nursing lounge.

Processed with VSCO with a6 preset

Processed with VSCO with hb1 preset

Basically though… we are ever and always winging this baby thing. Henry loves heat, noises, crowds, and his bottle, so it happened to be a winning combo. What was slightly less winning was how wired he was Friday night after the first game, resulting in a crying/screaming/refusing to sleep fiasco of EPIC PROPORTIONS. Rookie parents, that we are, and the ensuing meltdown on my part showed us that it is time to develop a more solid bedtime routine, hence the missed second game. 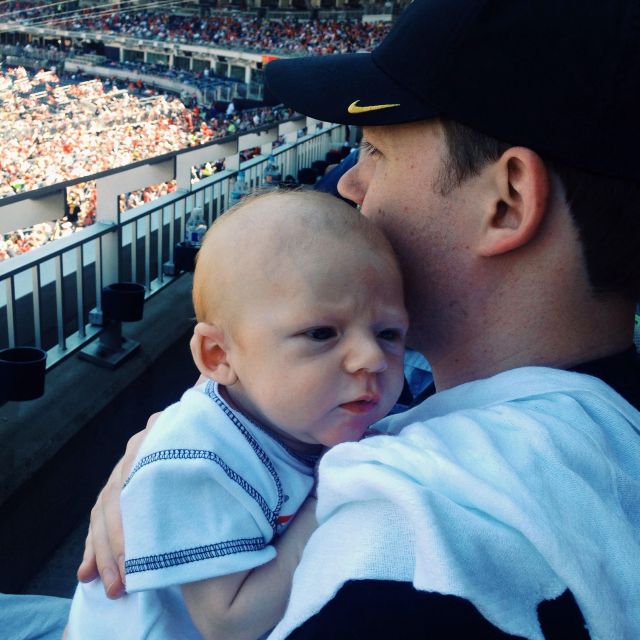 Processed with VSCO with g3 preset

Processed with VSCO with a5 preset

But in spite of any exhaustion from the weekend, I wouldn’t have wanted to miss a second of it. Being with my boys at the ballpark was the absolute best.

PS: Sometimes when you love someone it means letting your husband pick the toaster (even if it broke after like 2 uses), or cheering for a sworn enemy, or jumping on a bandwagon. (Sidenote: Spring of 2012 was also the best my hair has ever looked – whyyy won’t it do that anymore?)

5 Responses to When you really love someone, you have to take up the causes they think are important…