Run, run, as fast as you can

Confession: I am a master manipulater. I blame it on being a middle child and I learned it from my mother (also a middle child) who can have you finishing something you swore you would never do before you even remember beginning. Genius.

Anyway, remember this picture of my beautiful bridesmaids who threw me that great shower? 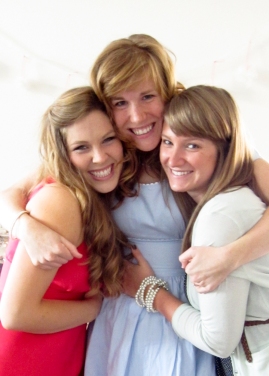 Well here is how the three of us looked the next morning at 6:30 am as we trudged across the National Mall to run the Cherry Blossom 10 Miler.

That’s right, Rachel agreed to fly across the country, bake all day for my shower, then get up insanely early the next to hike around holding a sign that had the simple slogan of “RUN!!!”  I either have the world’s best friends, or the world’s most easily persuaded friends.

The conversation to convince Suze to run the race with me went something like this, which I have pulled off her post about the whole affair:

Hannah: Suze, wanna do the Cherry Blossom Run with me?

Hannah: Actually it’s 10 miles!  We will run together and it will be so much fun.

Hannah:  You can totally do it!  10 miles isn’t that far!  PLUS, it’s the only way you’ll get to truly enjoy the famous cherry blossoms…the roads will be cleared for us to run below that beautiful pink canopy and you can drink it all in!  Any other time, there are so many tourists that you can’t see past the sea of cameras.  Don’t you want to see the cherry blossoms?

Hannah: Yes!  Of course!  Anyways, you have to enter a lottery to get in the race…a million people enter and only like 20,000 get drawn!  See, our chances aren’t even that high…but we should try!

Me: hmm, yeah, the chances aren’t that high.  Ok, I’ll enter with you!  (hehehe…because obviously we won’t actually get chosen)…

But then spring came early and all the blossoms were already gone, swirling around our feet like morbid confetti as we ran. (However, this did lead to the great sign someone was holding that said “There are no more blossoms, but you all are AWESOME!”)

James on the other hand only agreed to run it because he was buying time before our engagement. I was at the point where I was dissolving in tears about every other day waiting and pining, so he felt that agreeing to run this race would buy him at least a couple days for the ring to arrive.  I should probably explain that James HATES running, and never ended up doing more than 3 miles in training. I tried explaining that if he would think about something other than how much he hates running while he runs, it might go better. James’ plan was to finish the race at the 5k mark… but someone (me) read the map wrong and James ended up doing 6 miles before just exiting the course and declaring himself done. (He still loves me though, which is a sure sign that I should marry him. )

Thus here is our gang: James, Susannah, Sarah (my marathon running roomie who needed no persuading) and me.

Somehow I got a bib with a fast starting time so Sarah and I switched. 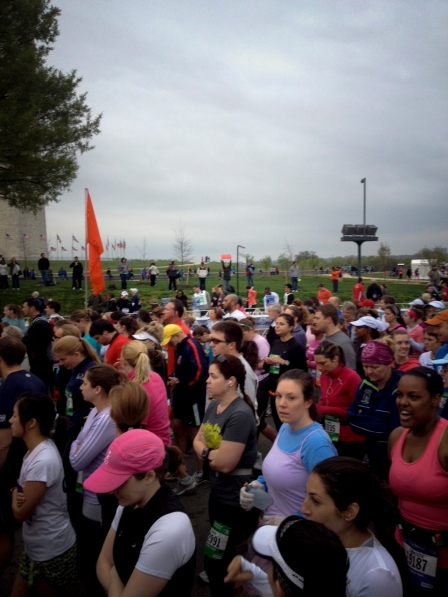 Our post race pic. In the second one of me and James, he is allowing his actual feelings about running to shine through. And Sarah looks that cute and composed because she had already been done for quite some time.

I am planning on convincing them to run it with me next year. Maybe Suze will forget that all the blossoms were dead…

This entry was posted in Uncategorized and tagged DC, exercise, running. Bookmark the permalink.

5 Responses to Run, run, as fast as you can