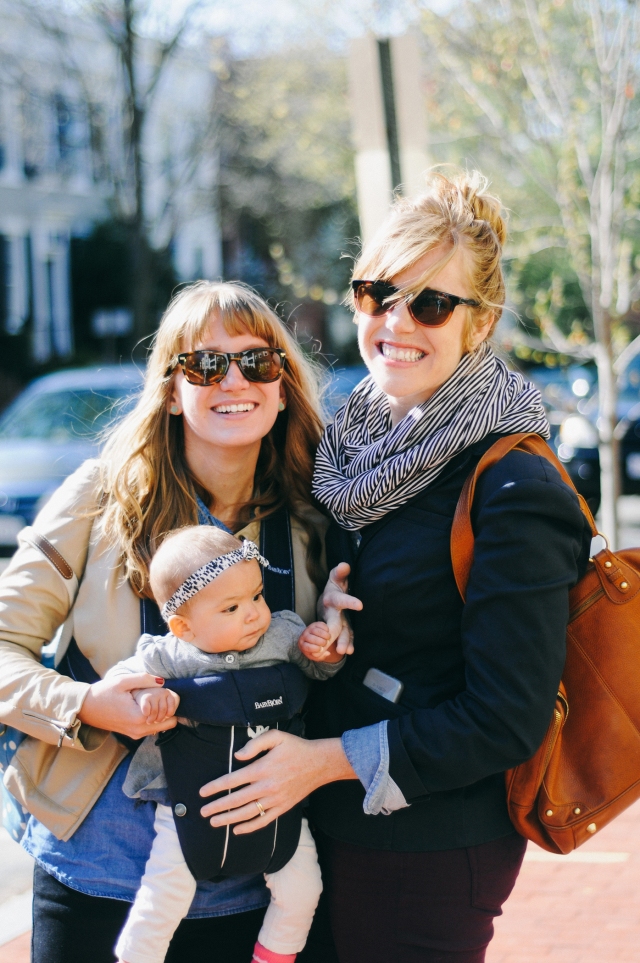 Last week I was able to grab breakfast with some of my favorite ladies. In case you didn’t get enough of Elise’s sweet face from our Easter pictures earlier this week, here are some more. There’s a strong chance that I will never have a baby as cute as her. I’m not being self-depricating — just honest. Some babies are cuter than others and Elise is pretty perfect. But then again, I’m a little biased because I love her mama a whole lot. We are at that stage in life where I spend a lot of time squeezing all the cute babies that our friends are having and I couldn’t be happier.

We grabbed breakfast at The Market inside Eastern Market. I hadn’t been until recently and I have since been back several times. I’m seriously considering a An Ode to Market Pancakes post.  It was a perfect morning, sunny and bright, with three childhood best friends in matching chambray shirts. We sat laughing and gorging ourselves on pancakes for a good hour until we stood up to go… and realized someone had come by and stolen Rachel’s wallet. They had stolen the sizable amount of cash she had pulled out, her credit cards, her IDs – everything. Since she is visiting from out-of-town, those IDs are especially rough to replace.

We aren’t exactly sure how they got it, as we were sitting there the whole time. I mean, who does that, steals a wallet from a group of girls holding a baby? Who does that? People, that’s who. Because the reality that I often forget in this beautiful, flower-filled, cheery city, is that it is still full of broken, cruel, hurting people. This whole world is full of people like that, people who do awful things. It’s the frustrating moments like standing up and finding your wallet gone that remind you how messed up our world is.

We called the police, and to their credit, they were awesome, searching all the trashcans to see if it had been ditched. But what was more impressive was the response of people nearby. I had to go to work, but Rachel called me later to tell me how it played out. Maybe it was the sweet baby, maybe it was the pitiful faces, or just maybe it was that humanity is better than we give it credit for, but everyone visibly showed their sympathy for Rachel’s plight. Most impressively, two men who were sitting nearby kept on apologizing that they didn’t stop it. Obviously, they were not responsible, and we told them so. But long after leaving, they came back and handed Rachel a wad of money to hold her over until she could get her cards back. Who does that?

People do that. People who live in this broken, cruel, hurting world. People who bear marks of goodness from their divine creator, even if they don’t realize it. People who are so much better than we give them credit for. People who surprise us and remind us we aren’t alone. Sometimes I can’t help but wonder if, just maybe, humanity is better than   we think. Just maybe there is a lot more goodness out there than we notice.

This entry was posted in Uncategorized and tagged breakfast, Eastern Market, friends. Bookmark the permalink.