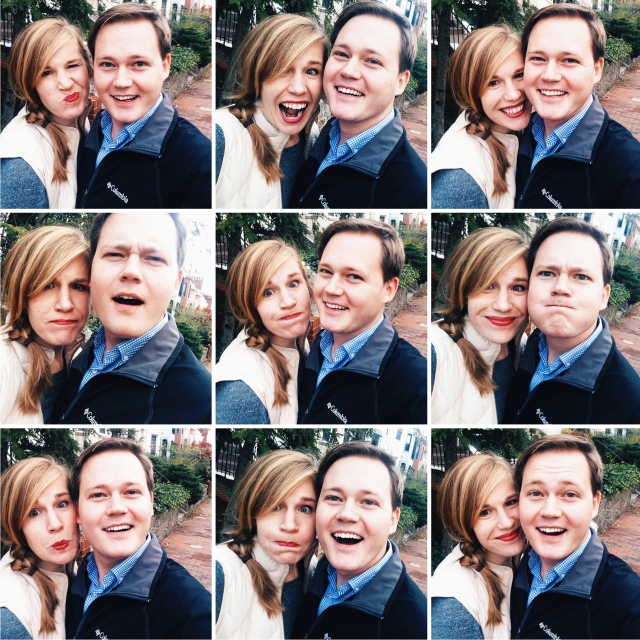 Guess who showed up at my door this week with flowers, a box of Kleenex, and all of his luggage in tow?

After a weekend of being profoundly ill — we are talking just-leave-tissues-stuck-in-your-nose ill — I was more than ready for that husband of mine to move home for good. After close to six months of long distance marriage we are DONE.

As excited as we both are to be back together, I know that the readjustment will have little bumps. I have my own schedule now, my own habits, my own proclivity to sleep spread-eagle in the middle of the bed and have everything just as I like it. He has spent six months  reverting to bachelor ways. I basically like to stay up late and watch all of my TV shows in peace, and we shall call them Legion, for they are many. He has little interest for the CW lineup. Anyone who has lived apart from a spouse knows that it is just a little bit like being newlyweds when you come back together. The excitement, yes, but also the learning. Still, it beats the alternative by a factor of approximately a million.  We are back to laughing on the couch, taking walks around our wonderful city, and eating together at our table.

It also has me thinking back over this time and feeling so appreciative for some of the people who have made it easier. I’ll be honest, there where some people who I expected would be more supportive who weren’t. Everyone we know is so busy, and I can’t really blame them, but it still stung. But then there were others, friends who were constantly checking in, constantly inviting me to things, constantly dropping by to stay up late with me and watch bad TV. Those people, and I could cry with gratitude just thinking about them, made all the difference in the last six months. And you all, the faceless readers who have written comments, sent me emails, left notes on Instagram — you will never know how much that meant. Thank you.

And now. Now I promise that this blog will hopefully become less of a my-husband-is-gone sob story and resume its previously scheduled programming of brunch and pictures of my feet. Let’s get that last part started right now, with some feet that I am happy to have around the house again, even if their owner has forgotten not to leave his shoes all over the entryway.

PS: On a totally unrelated note, let’s talk about my lipstick in those top photos. It was totally an homage to Taylor Swift’s impeccable makeup in her latest music video, “Blank Space,” wherein I cheered when she stabbed that cake as if I too had a long trail of sordid exes. Cannot even help it.

This entry was posted in Uncategorized and tagged husband. Bookmark the permalink.