Your husband is not a babysitter. 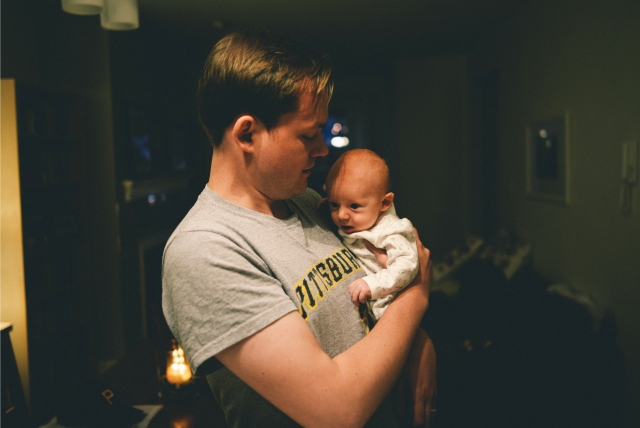 Recently I went out with some girlfriends. It was a Sunday night, I left the baby and a bottle with James, and I met some friends for an evening of good food and conversation not interrupted by feedings or crying. I didn’t worry about how I would breastfeed in public, and we talked about things beyond baby schedules (though that is a topic for which I have ENDLESS stamina these days).  It was wonderful. Henry was about a month old, and I wasn’t gone for more than a couple hours, but those couple hours of focus beyond myself, my baby, and my home had me returning relaxed and rejuvenated.

In  the course of conversation, I mentioned that it was the first time I had really left Henry just with James for more than an hour, and I hoped that everything was ok, that Henry was taking the bottle and staying calm. Of course, I laughed, James is perfectly capable of keeping him alive and safe for a couple hours, so I don’t know why I feel like I have to be there all the time. We talked about this phenomenon, about mothers who hate to leave their kids with their fathers because we don’t want to impose, don’t want our darling husbands left with screaming babies. We feel bad when we ask our husbands to babysit, because we are fully aware of the difficulty our babies often present.

But that’s the problem: your husband is not a babysitter.

It is a dangerous linguistic falsehood birthed from a very practical reality. During the parenting of young children, there is often one parent who acts as the primary caregiver, and frequently, it is the mother. This is normal. I am with Henry almost all the time. I feed him, spend hours analyzing his every action and discerning his responses. I get to know his moods, habits, and predispositions, detailing nightly for James the advances of our baby and my observations on what is and isn’t working. In terms of sheer hours in the day and abilities (read: breastfeeding), I am far and away the dominant parent.

But I am not the only one.

Henry has two parents – not a parent and a babysitter who sometimes watches him. He has two people equally invested in his life, even of one’s investment is primarily earning the living that sustains us while the other puts in more hands-on daytime hours.. He has two adults committed to his well being and the real question is which one is on duty.

And so, I never ask James to babysit. We look over our weekend schedule together and decide if it is easier for him to stay with Henry while I run errands, or we discuss if there is a time when I could slip off and go running or meet girlfriends for pizza and sangria, or a night that it is better for him to work late or attend some event. We work together to juggle schedules and needs, but we do not go into those discussions with preconceived decisions that one of us has a lesser responsibility to our baby.

I never ask him to babysit, but I do ask him to watch our baby. Why does it matter, this slight difference in vocabulary?

It matters because words matter, because words create reality, because words convey so much more than we realize. Because the way that we talk about people and what they do — especially when discussing something like gender roles — has a direct impact on what our culture expects.

By talking about our spouses “babysitting,” we relegate them to a lesser responsibility in their child’s upbringings. We elevate motherhood to the sad detriment of fatherhood. We imply that a woman’s care for her children is a perpetual given, but a man’s care for those same children is a special occasion that falls outside his normal responsibilities. In that word, we rob our husbands of the right to fully parent, aligning them instead with a teenage girl who follows a list of instructions and gets paid at the end of the evening. This idea of father as babysitter is entrenched in society, whereas we staunchly fight against other misnomers every day. I for instance [happily] do almost all the cooking and the laundry, but if James referred to me as the cook or laundress, I hope we would all agree that that is insulting.

Furthermore, I think it is valuable for fathers to get some time alone with their babies and their children so that they fully feel the truth of their right to parent. James often asks me what he should do with Henry in certain situations, not because I am the authority, but because I spend the most time with him and I am working on establishing norms and habits during the day. He wants to parent alongside what I work all day to implement. But I would never want him to feel incapable of making his own decisions about what our boy needs, or insecure about his parental judgement. I want Henry to grow knowing that two parents are coming together to raise him.

And so, when I go out sans baby, I don’t ask James to babysit and I try to remember not to tell my friends that I’m free because James is babysitting. I’m free because Henry has two parents, and I am currently the parent off-duty. I’m free because James recognizes this and enjoys time with his son. I’m free because marriage is a glorious partnership of unequal tasks, but equal commitment. These are the truths that we support when we stop calling our spouses babysitters. Let us rethink our words to talk our way towards a society with a better understanding that it takes more than just mothers to raise children.

14 Responses to Your husband is not a babysitter.