Because let’s be honest: every location and age has its pitfalls and joys, its tricks and tips and my experience amounts to a whopping one baby, in a select number of places. I do not at all claim to be a specialist in baby travel, nor am I going to bore you with the things that everyone shares, like having your baby eat while taking off in a plane, etc. Nope. In keeping with my desire for easy fixes, here are some things that you can buy/bring/plan to make your life easier, should you find yourself traveling to France with your very mobile and active 13 month old, too old to just sit contentedly everywhere, yet to young to actually be entertained or contained by the traditional gamut of TV/coloring/new toys etc. It should be noted that I am about to recommend bring more stuff when you travel, and the hip prevailing wisdom is you should always travel light. Well, traveling light with babies sometimes means being less prepared, and this extra stuff made our travels way easier than minimalism would. We had two carry on sized suitcases, a backpack, my diaper bag/purse (which could be worn as a backpack), an umbrella stroller, and a travel crib (see below). It was more than I originally wanted, but still enough that we could carry it and walk without too much trouble.

Fly Air France. I am not someone prone to waxing poetic about non-budget airlines, though we are BIG Southwest fans for domestic travel. But Air France now has my heart. Henry was too big for the lap-infant bassinet they provide, and a friend mentioned that Air France will usually just move the person next to you to give your baby a free seat. I was skeptical, as you have to pay to pick your seat, and so who would give it up? But I timidly asked, and both flights they immediately moved the person next to us, giving us a row to ourselves and a free seat for Henry. A flight attendant I ran into on our train confirmed that they will always make every effort to do this if you ask, because less crying from your squished baby makes everyone on the flight happier. The moved parties were happy too, as they were either given a comparable seat or bumped to business class, and let me tell you: the 16 year-old girl who got to fly business instead of next to our squirmy baby could just not move her carry-on bag any faster.

Cut all the lines. This trend of people being impossibly nice continued in France. We were instantly ushered pass every line, be it taxis, museums, customs, etc. I had head this was the case, but I couldn’t have even imagined how awesome it was. I don’t think France loves babies as much as they HATE screaming babies, and they realize that less waiting equals less possibility of a meltdown. So my advice? Take your baby to France and you will be treated like ROYALTY.

Travel a time of year when you can eat outside. Messes are less daunting, crying less irritating, and babies more distracted when you can eat outside. We always requested outdoor tables, and I usually asked for a table to seat four so we had room to stretch out. Some restaurants balked, as the French don’t love you taking up excess space. But I dug in and insisted, which led to positive dining experiences everywhere we went. It is possible that the success in insisting would be harder if you didn’t speak French… but it is worth a try!

Take a high chair. Though you may be royalty, don’t expect your tiny king to have a throne at the table. Several friends had mentioned an absence of high chairs, which isn’t a problem with bigger toddlers who can sit in a chair, or tinier babies who can stay in strollers. But my wild 13-month old will throw all my food on the floor if he’s on my lap, and yet wants to be at a table. So we borrowed this folding travel high chair from a friend and just kept it in the bottom of our stroller. We ate out a lot, and only ever encountered one high chair, in spite of always asking. And almost every single restaurant thanked us for ours, saying it made things easier for everyone. I really debated if it was worth it to take it, but we just slipped it in the pack n’ play carry case and it was worth it a million times over.

Minimize your mess with these. I hated the idea of Henry leaving a messy table and causing the French waiters to judge me. As he is still in the swiping plates off tables stage, and none of those silicon sticky plates have been able to stand up to him, I bought a pack of disposable placemats that stick to the table. They were CLUTCH. I think 50% of our feeling that the trip was a success was because we got to leisurely eat in restaurants, and that is 100% because of the high chair and these. I would dole out little chunks of banana or my food and he would eat as we did. I kept a bib in the stroller too and just rinsed it off after eating. Yes, James usually had to take him out to play while we waited for the bill and paid the check, as there are limits to his tolerance.  Yes, we often skipped dessert and chugged cocktails slightly faster than normal. But being prepared for the logistics of French dining was a HUGE stress eliminator. It also meant that we were praised and coddled in every single restaurant. We are talking French waiters kissing my baby, playing with him, bringing him treats and stopping to chat about their own families, etc. This is NOT NORMAL for French service, and I really credit it to our efforts to facilitate calm and clean meals… as much as possible with a squirmy little. 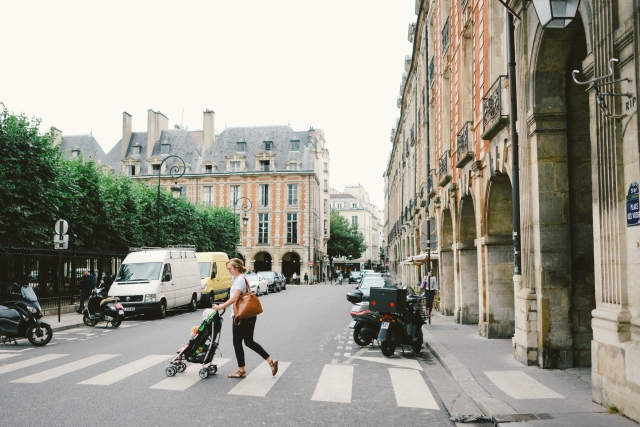 Don’t expect a changing table. We only ever encountered one bathroom with a changing table, and many French restrooms are tiny. Having a sanitary space to change Henry and then wash my hands was not an option. Having one of those pouches that folded out into a mat was so helpful to turn any space into a changing surface.

Bring a tiny stroller, but make it a sturdy one. If possible, leave your minivan stroller at home and bring a tiny one. French walkways and cafés are so much narrower than American ones and it was nice to not leave [even more] destruction in our wake. I grabbed this one for $40 in a flash sale on Amazon and it was so great. Light, reclines all the way, good basket, and easy to fold and carry.

Yes, it is worth it to schlep your entire sleep system. The other 50% of our trip feeling successful was that Henry slept GREAT and thus we all felt rested. I talked a little about that here, and so much of it is due to the intense sleep training we did when he was young. But part of that training is the fact that he knows to go to sleep any time he is put down in his normal routine, no matter where, and no matter when. He was not phased by jetlag (coming home was a slightly different story!) and as I mentioned here, jetlag actually made our European evenings so much more enjoyable than American ones. We used batteries in our normal soundmachine, borrowed this hyper light travel crib from a friend that he is used to napping in, and brought his blankies and sleep sack. Thus, we had no issues of him ever going to or staying asleep. I was really dreading hauling a pack n’ play along with our stuff, but I’m so glad we did. The hassle of taking it (and yes, it was a hassle doing the train, metro, walking, etc. carrying it) was completely negated by the good sleep it gave us all. France loves shutters, so I knew that light wouldn’t be a huge issue, but if I was traveling somewhere else, I would even consider tossing one of these in. I cannot emphasize enough how much us all being well rested contributed to the success of this trip.

Yes, it is also worth it to rent an Airbnb with actual rooms. When I was looking for a place to stay, there are soooooooo many cheap options that are lovely, but only studios. We only wanted a place with an actual room so that we could stay up when Henry is sleeping, and I’m really glad we did that, even if it meant paying slightly more and having fewer options. It let James and I take some time after he went to bed not only to hang out, but to regroup and plan for the next day. 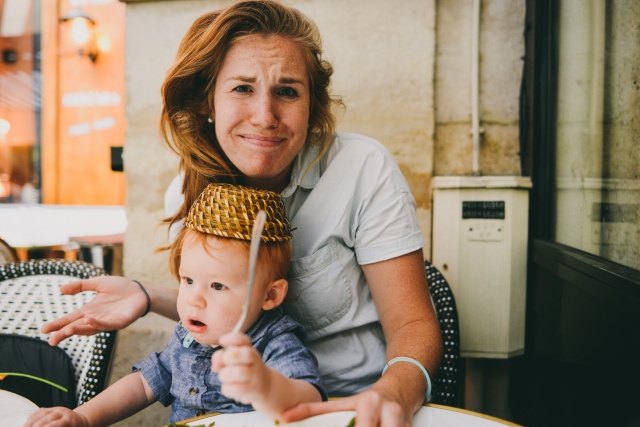 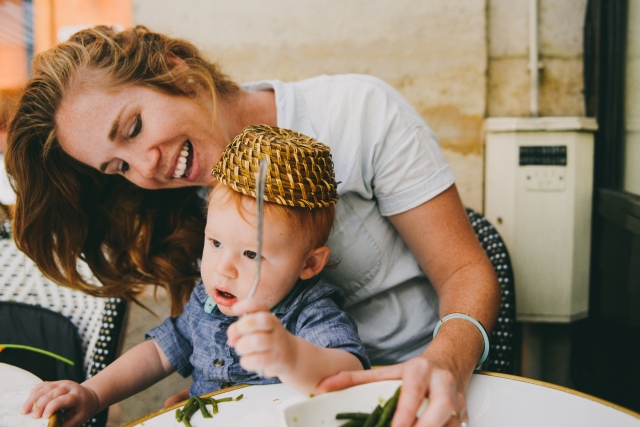 Those new books and toys everyone suggested will do absolutely nothing to entertain your baby. But that one mom at church who suggested slowly doling out colorful cotton balls for your kid to slowly insert into an empty water bottle and then dump out is PURE GENIUS.

Also take a ball. It is the toy that entertains my kid more than any other. We just kept a baseball sized ball in the stroller and whipped it out whenever he needed to get out some wiggles.

You need more clothes than you think you do. Our Airbnb that supposedly had a washer didn’t, and we were stretching our clothing pretty thin towards the end. I am used to being able to travel on a crazy small capsule (remember this?), but I should have packed a couple more outfits for Henry, because babies are a wildcard of mess. Minimalism works better for people who don’t poop through their clothes from time to time.

And some other products that made life easier: this sunstick for easy application / Turkish towels for everything from beach swims to picnics because they dry fast and are soooo  much less bulky than regular towels / Lara bars for quick protein snacks / a change purse instead of wallet to keep track of Euros / packing cubes to at maintain sanity as we lived out of suitcases.

We were not perfect travelers with a baby. I really struggled with healthy snacks on the go, as he is too young for things like nuts or carrots. As a result, we had some hunger meltdowns and he ate a lottttttttt of croissants, crackers, and apple sauce pouches, things that I try to minimize at home. We went out without the correct amount of wipes and diapers on several occasions, leading to serious prayers for the multiplication of our wipes before impressive blow outs. We didn’t plan perfectly and had to reassess or activities a couple times. But on the whole, it went so much better than I ever could have imagined and I hope these tips and tricks encourage you to confidently put France on your “Go Here With Tiny People” list.

What are some of your favorite tricks for lengthy travel with kids this age?