Hello there! We are back from traveling, which now means that I will drag you through our trip in excruciating detail. Hold onto your butts.

I employed my tried and true European travel selection method in picking Annecy for our vacation: a Google image search.

That’s it folks. I am unabashedly someone who chooses pretty places to travel, and this is even more the case when we were considering traveling with Henry, because our agenda was going to be light on museums and extreme outings, heavy on walking and wandering. While James originally agreed to a trip to Sweden in November, he was not the slightest surprised when I announced that our adventure had morphed into a trip to France in July (because y’all- Sweden is cold and dark in November). I just can’t go over the ocean without spending time in France, immersed in the food, language, and culture. I tend to spend lots of time in my former stomping grounds of Paris, but for this trip we agreed on visiting one other area, so long as it was a relatively short train ride, as both James and I hate everything about driving around a foreign country.

And thus it began, my Google image search of cities within a decent train ride from Paris.

While it was perhaps selected solely for its aesthetics, Annecy did not disappoint, and it proved a perfect place to travel with a baby/toddler. It is small, almost entirely pedestrian-only streets in the city center, impeccably clean, laid-back, friendly, and had some of the best food I have eaten in France.  We spent two and a half days there, and while we didn’t technically have any more activities to keep us longer, we both felt that we could have happy spent at least a third full day just meandering the town and gardens and swimming in the lake. Because what makes good travel with unpredictable little people is planning to not plan, choosing destinations that allow for maximum flexibility without feeling like you are “missing” something.

And now, way too many pictures of the perfect gem that is Annecy.

//This kid did SO well traveling! There were a couple awful moments, like when the train AC broke and he was so over it, or when he hated biking (see later on this post), but for the most part- champion baby. I’ll blog later about the things we did/brought that made it better, but I credit so much to sleep training. We were able to simply shift his sleep window so that he happily stayed up until 10:30/11, letting us eat out and walk around, and then would sleep in until 9 or 10 or even 11 (once!), allowing us to sleep in. He napped on the go, only woke up in the night 2 times the whole trip, and generally let us all get enough rest to enjoy ourselves. I was so, so, so worried about it, but good sleep habits + jet lag in a favorable direction + croissants to smooth over rough moments, and things were great!//

//Annecy was heavy on the mint and pinks, and I am now on a bit of a mint kick. GIVE ME ALL THE GREEN THINGS.//

//Some friends from Paris now live not too far from Annecy, and they met us for the day, which meant Henry getting a tiny buddy, and me getting to catch up with some of my favorite people.// 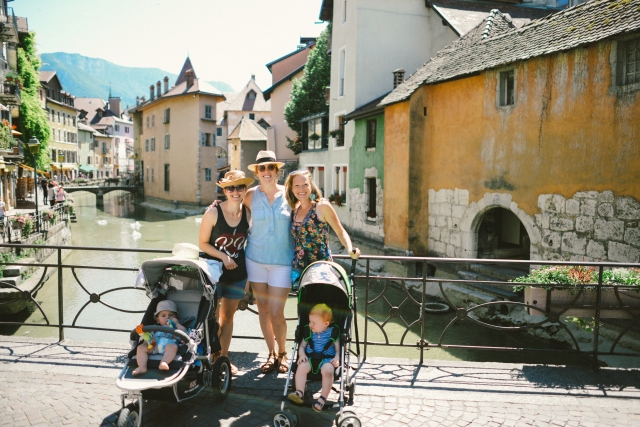 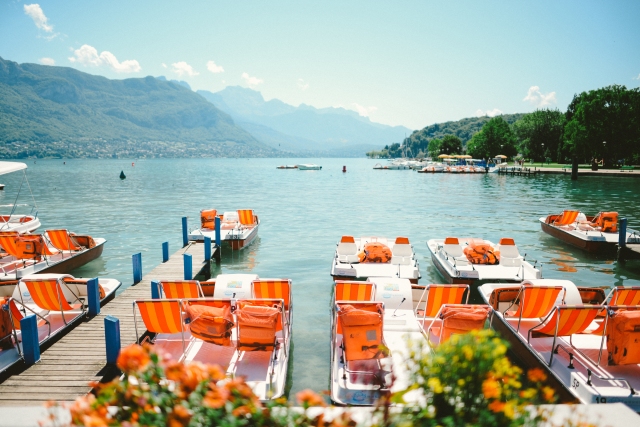 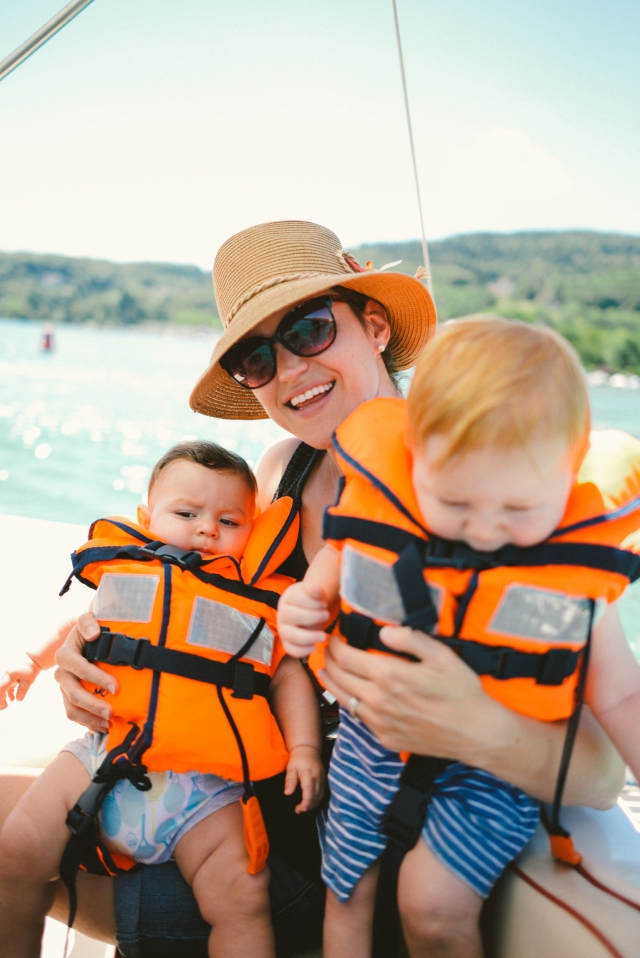 //THAT WATER. We had actually planned not to rent a boat, but it was so uncomplicated and the water so inviting that we got swept up and did it. We didn’t stay out long, and we didn’t swim off the boat, though you easily could. You can even rent a paddle boat with a slide right off it into the water. And no permit or reservation required – you just go up to one of the many kiosks lining the boat and hit the water.// 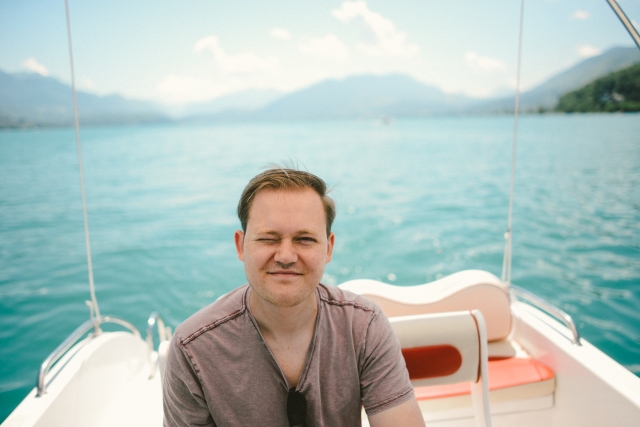 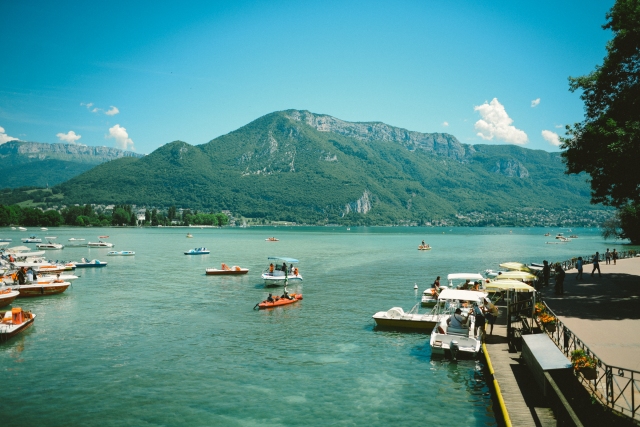 //The water is supposedly clean enough to drink, and I believe it. It was the clearest, most brilliantly teal water I have ever swam in, the type of water you expect on the southern French coast or in Italy. But since it is a lake, there is no salt, no sharks, no jellyfish, no currents, or waves, making it way less daunting with Henry.// 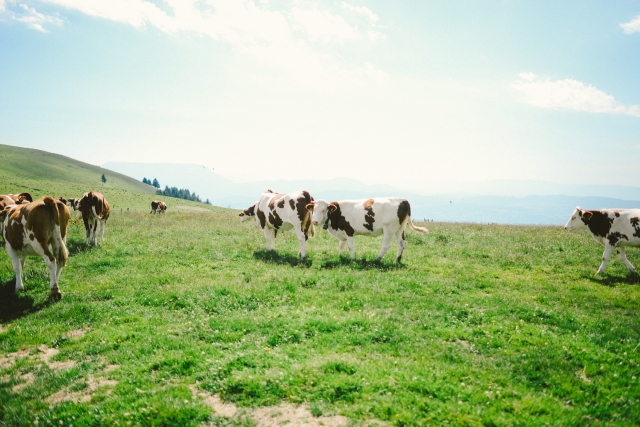 //Annecy is the perfect combination of aqua water, pretty town, and then mountains and alpine meadows. Following our morning on the water, we took the bus up the mountain Semnoz and spent an afternoon hiking and playing in the Alps. The meadows are all free range for these beautiful cows, and are dotted with dairy farms that make the delicious regional cheeses.// 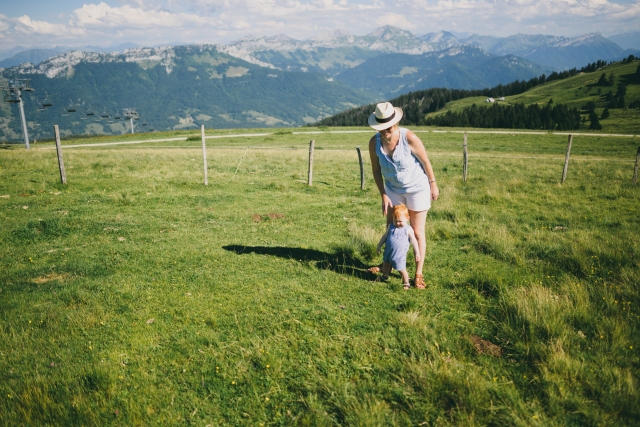 //The way he started walking with his belly poked out KILLS ME DEAD.// 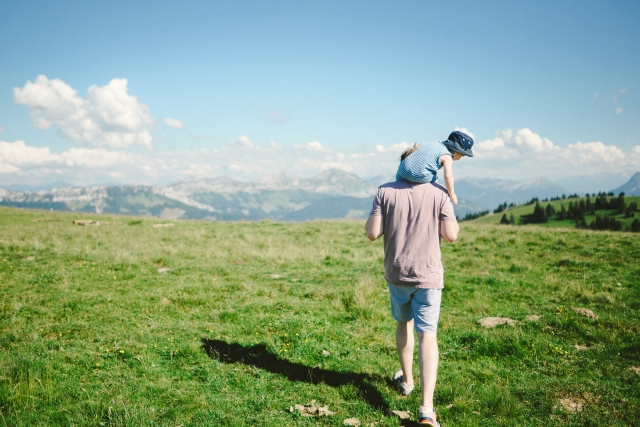 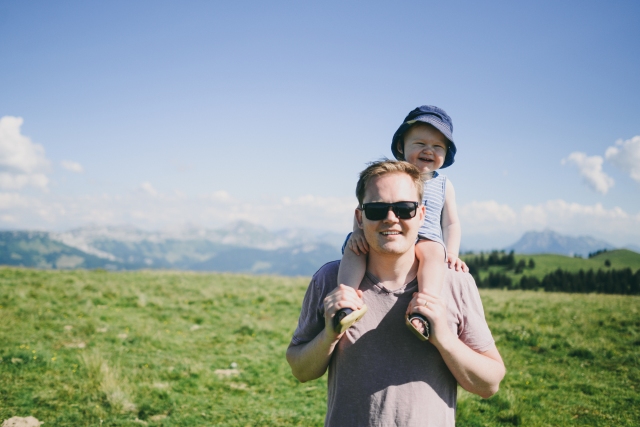 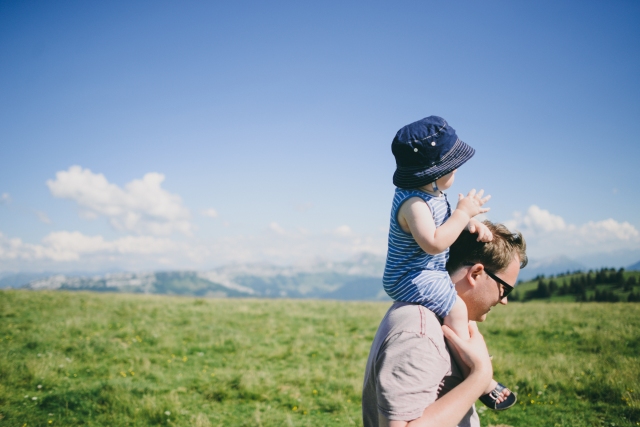 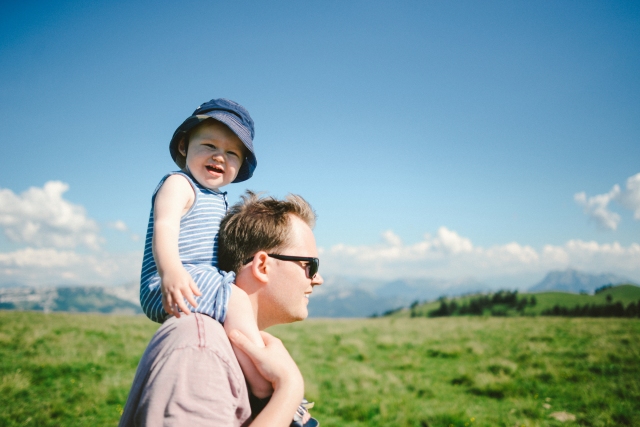 //Henry’s favorite part of the trip was probably this moment, putting gravel in this hole and then filling his empty water bottle with rocks. What you don’t see, is that this is the moment when we were told that the bus to take us down the mountain might just not run that day. As we waited to see if it would come, Henry had a blow out of EPIC proportions, and we were down to our very last wipe and no change of clothes. The bus did arrive, barely slowing to a stop before it continued on and while we made it on, there were some hikers sprinting towards it in the distance that were not so lucky. That’s France.// 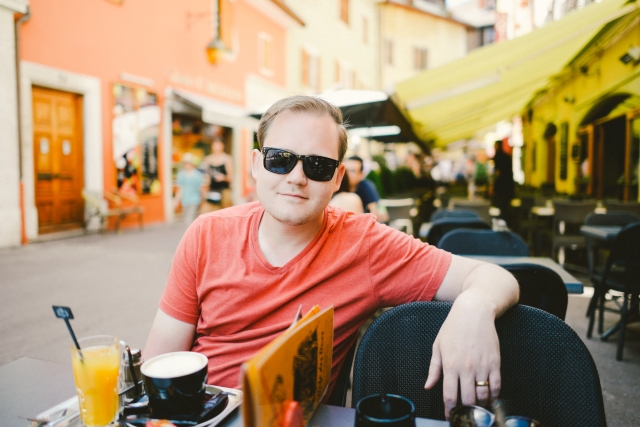 //Our rule for the trip was to eat outside as much as possible, and we actually succeeded at every meal. This made a HUGE difference in our ability to dine out with Henry. Every place we ate in Annecy was delicious, and I wish I could remember any names, but we just wandered checking menus and picked cute places. We did have one expecially notable meal at L’Etage, and two at great places along the canal. //

//Henry carried that piece of toast around for the better part of an hour… gosh I love this age!// 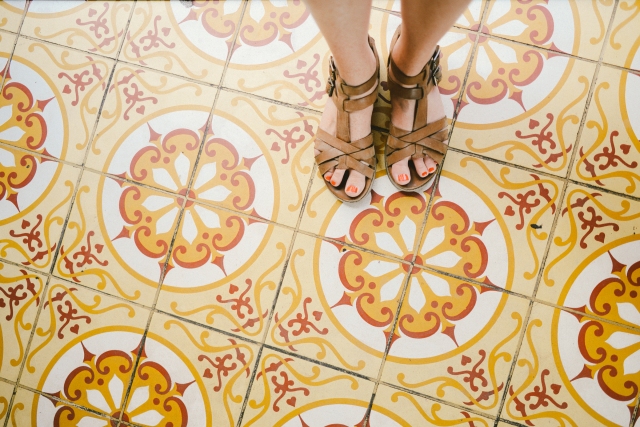 //These were the only shoes I wore the entire trip and they are perfect.// 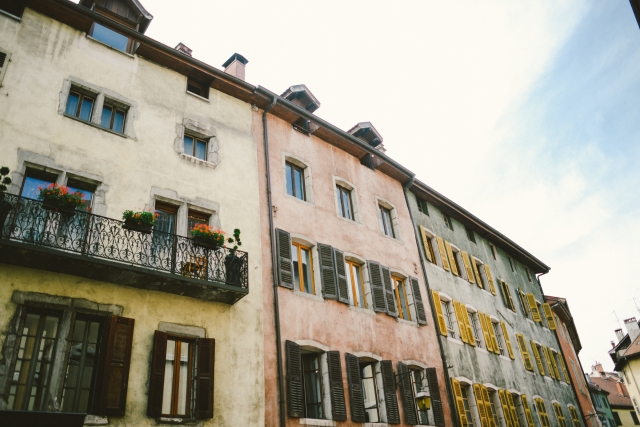 //The second day we rented bikes and hit the path that goes most of the way around the lake. The plan was to stop and swim several times, meandering through the countryside dotted with tiny villages as Henry napped in the baby seat or happily looked around. That did not happen. There is no way I can emphasize enough how much Henry HATED the baby seat, or at least, the helmet. He dozed off a couple times, but mostly screamed and tried to fight his way out of it.  We stopped to swim at one beach and it was just as magical as I imagined, and our lengthier ride allowed us to cycle through some stunning areas. But if I was doing it over, I would rent the bikes longer, but actually ride less, stopping more frequently. I would also make sure to get the baby seat you pull, to at least distance the angry baby a bit. Still, the fact that this day of biking was one of my favorite parts in spite of Henry’s protest shows how truly stunning Lake Annecy is.// 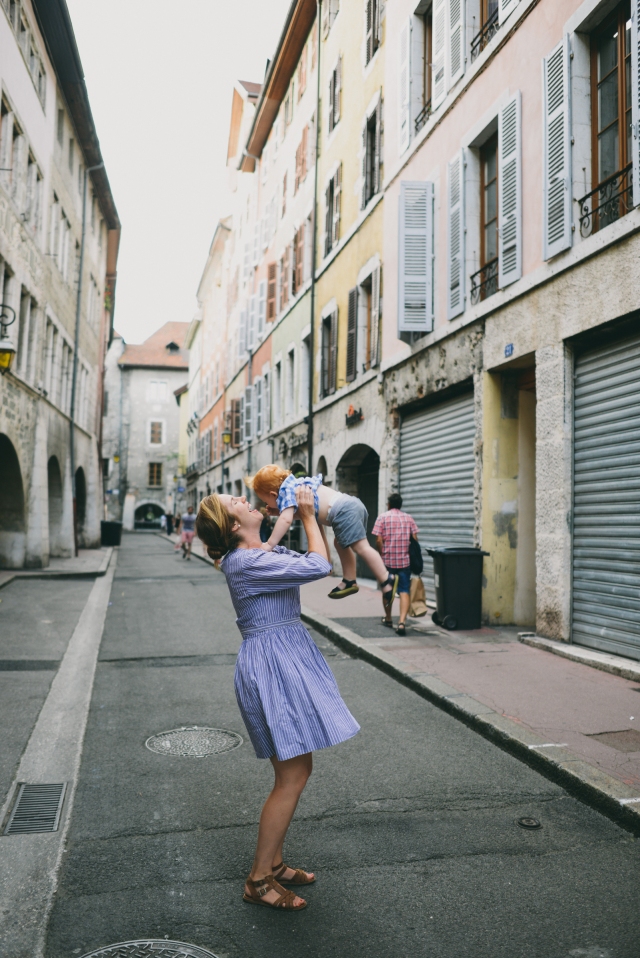 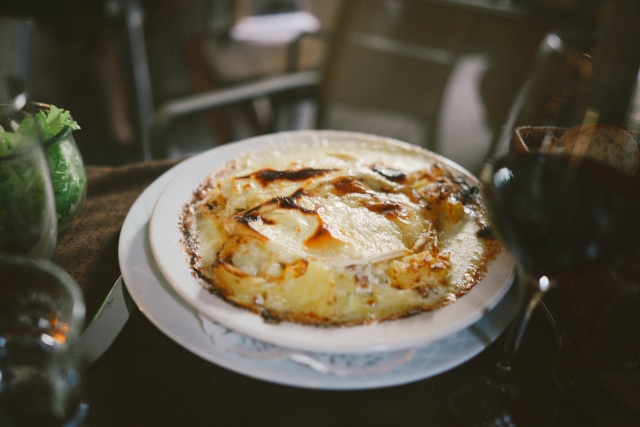 //This is tartiflette, the regional dish of Haute-Savoie. We ate it in a variety of forms at almost every meal, and I actually made it last week when we got home because we loved it so much. Now I feel like I have a personal crusade on for someone to open up a French restaurant that serves cuisine from this area of the country because it is GOOD.//

//Behold, the only non-selfie picture of the three of us from the entire trip.//

//Henry eats really healthy at home, and he had sugar for the first time on his birthday, and it has been a rare occurrence since. But in France, all bets were off. And you know what? It’s fine. The adjustment back was rough, but it was worth every bit of it for the joy that I had sharing ice cream cones, pastries, chocolates, and bowls of whipped cream with my boy. He never had tons at once, and we are back to days of steamed broccoli and roasted sweet potatoes, but it was worth it.//

People, put Annecy on your lists. Everything about this first leg of our trip was perfect. In fact, when we got to Paris, we kept on saying that Annecy was so easy and so good and so tasty and so clean, and every other superlative you want on vacation. It was the perfect way to start our week in France with sun and color and ice cream coating our fingers.