Bambi and the Lion.

Every year I worry that it might be the last year I can persuade my children into wearing adorable animal outfits on Halloween. At some point they are going to rebel and demand to be Disney princesses or superheroes or it will occur to Henry that he could actually dress like Thomas the Tank Engine or an astronaut and my years of tiny creatures will be over. Remember when Henry was the tiniest elephant? And then last year, when Etta was the Ettaphant and Henry was the least bad big bad wolf around ? Nothing delights me quite so much as my kids as animals.

This year, Etta was the sweetest fuzzy lion, and Henry – by his own volition – was Bambi. My mom showed him the movie this summer and it was both a little traumatizing (can we talk about how Bambi’s mother disappears and is NEVER DISCUSSED AGAIN???), but also an instant hit with Henry. Our new neighborhood is in a part of DC that has big stretches of land managed by the national park service and there are deer everywhere. This has furthered the Bambi fascination as we have many discussions about where Bambi is at (always the thicket) and what he is doing (usually sleeping or hanging out with his mother) daily.

His fascination led to this adorable little deer, who spent most of the day wearing his costume and ducking inside the bathroom to check and see if his antlers had grown yet.

It also led to a secondary fascination, that of requesting that I dress like Bambi’s mom. This is problematic at best, morbid at worst, and I have tried to pinpoint what he thinks actually happened to Bambi’s mom, at which point he just vaguely stares off into the distance.

In other news, Etta the Lion was SLAYING ME with her fuzzy perfection. And how much does she look like Henry in the same costume 2 years ago??? 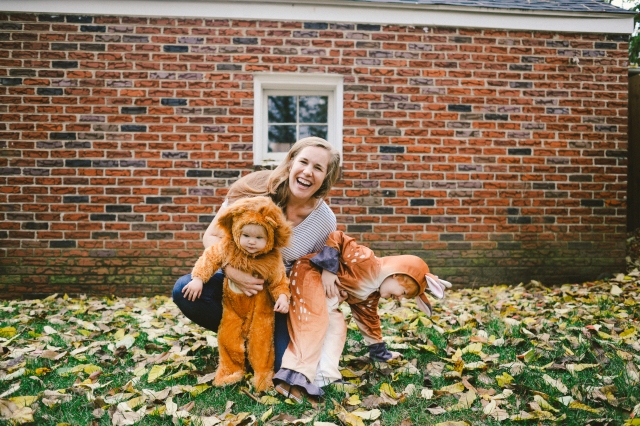 The only person more excited than me about Etta as a lion was Henry, who kept trying to pull her tail and get her to roar. She did on occasion roar as requested and it was so cute that it led to more attempts to provoke a roar. 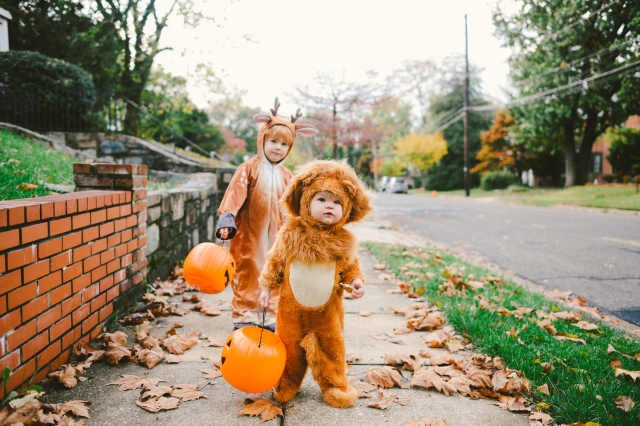 We were dressed and outside ready to go long before anyone was ready to start giving out candy. Henry has been talking about it since last year, and been practicing for at least a month. Etta spent the first couple houses trying to cram leaves in her bucket, and then promptly shifted gears and tried eating still-wrapped candy.

For our kids, candy was the goal. And James and I are not opposed to that, as we did Year 2 of The Great Candy Draft, in which we stayed up and NFL draft style divided Henry’s candy between us. But I really felt like this year our major goal was to experience Halloween as homeowners who are invested in our neighborhood. It’s the first year we have given out candy (though a huge storm and a SNAKE ON OUR PORCH) meant the crowds were smaller than anticipated, and we stayed to chat at every house on our block as we went around, talking with neighbors that we are getting to know ever so slowly. I missed the ease and grandeur of Capitol Hill trick-or-treating, where everything is close and impressive. But I love that we are knowing more and more faces around our neighborhood, love that we ended the evening at a party with new friends and kids jacked high on sugar, love that our kids are feeling more at home on the streets that we walk daily, love that this is home, indefinitely.

So these pictures feel extra special, of Bambi and a little lion, racing around not just a neighborhood we live in at the moment, but our neighborhood. 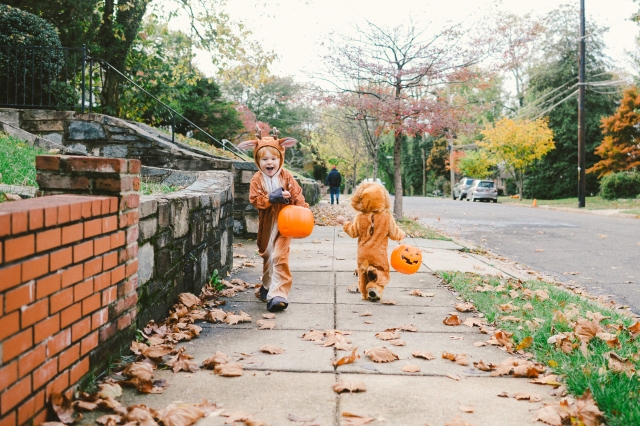