This is really a great time for TV. It’s cold, which makes me want to stay inside and watch it, plus we have all the award shows to add a little flare when we get stuck with reruns.  Admittedly, I don’t really pay attention to all of the awards, but I can’t get enough of the clothes. (My friend Anna gave a particularly nice recap of some of the best and the worst from the Golden Globes – check it out here.)

But the real clothing to watch is on Downton Abbey.

Did you catch seasons 1 and 2? Here is a summary in one sentence: Really rich and privileged family struggles against all odds to keep their estate and retain their old order attitudes throughout the many changes undergone by the aristocracy during in pre-World War II England, while their servants provide a counter perspective.

In theory, I should love Downton Abbey… and I do, sort of. I love all BBC miniseries, and this isn’t technically by the BBC, it is still a British miniseries. There are costumes, and stodgy butlers, and Maggie Smith. I devotedly watched season one, and two, and I am trekking along with season three, but I don’t know how much longer I can take it. Downton Abbey is far from being a fine British miniseries along the likes of Cranford, Wives and Daughters, or any of the lengthy Jane Austen remakes. Instead, it is like a tiresome American soap opera with better clothes, good accents, and more servants.

The most endearing thing about watching a British period piece is the utter grace with which the characters welcome total tragedy.  The women of Cranford walk in to financial downfall with a stiff upper lip and touching camaraderie. The couple in He Knew He Was Right slowly watches their marriage fall apart without plunging into undo dramatics. The family in North and South has their entire station in society downgraded and they make the best of it.

But the Grantham clan? They fall apart and resort to pathetic bickering and scheming over anything.

Not that they would have to, because Julian Fellowes is not actually  going to let anything bad happen to the inhabitants of Downton Abbey. Lady Mary throws decorum to the wind and ruins her reputation with some Turk? Don’t worry, we’ll just keep on finding ways to brush it under the rug. Matthew becomes paralyzed? Never fear – he’ll grow out of it. But oh wait – Lavinia might steal him away! Good thing there is always an epidemic on hand to wipe her out. And most recently, Downton in total peril, ready to close its doors against mounting debts. But luckily, there is a mysterious inheritance that shows up out of nowhere for Matthew. There for a moment, I thought we might actually have some hardship and Matthew might have to do the right thing with British grace and give up the money. But no – another improbable twist and all is well. 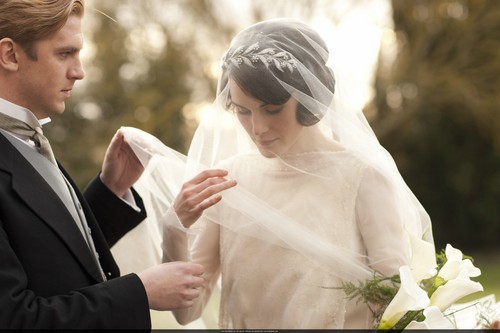 Unless you are Edith, and nothing is ever well. Life is eternally awful for the unloved middle child, to such an extreme that it becomes comical and you can’t even feel sorry for her. (But have you seen Edith with googly eyes???)

What would have happened in any other British period drama was that Matthew would have married Lavinia and they would have grown old together and had lots of children to fill Downton Abbey. Lady Mary would have married that newspaper man, been filthy rich and absolutely miserable in the big house next door. But over many years, she would have eventually learned valuable lessons. (Think of Daniel Deronda).

Other issues that bare discussing include the impossible timeline and the fact that it is drifting into, to quote my friend Bethany, “let-us-foist-our-twenty-first-century-ideals-upon-a-different-time-period-and-thus-show-how-enlightened-we-are-now territory.” I invite you to hop on over to her blog to hear a far better critique than I am offering here.

Of course, I would be hypocritical if I didn’t admit that I am still going to be glued to my screen to see how things shake down for the Downton crew. I’m hoping for some real tragedy experienced with poise and sharp wit, but if not, I know a lot of other good miniseries that can fill the void.  And admittedly, hours of obnoxious melodrama are all worth it when Maggie Smith opens her mouth.

Plus… the Downton craze has led to some pretty great stuff. Go waste your time here.

Downton Abbey watchers, what are your thoughts?

This entry was posted in Uncategorized and tagged entertainment, rant, tv. Bookmark the permalink.