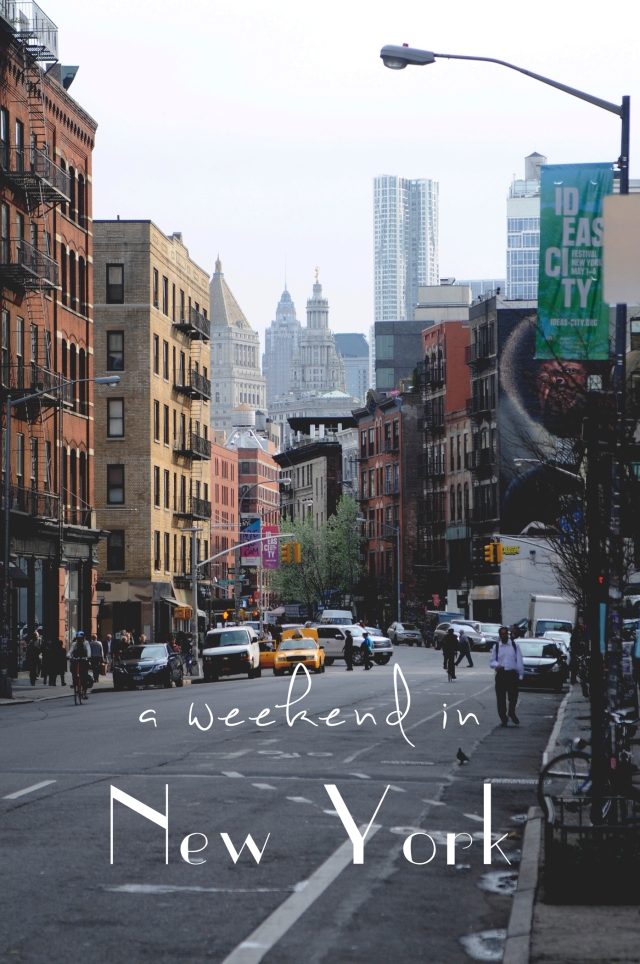 Instead of actually unpacking my suitcase from last weekend in New York, I decided to blog about it. That’s almost the same thing, right?

Last time I was in New York, I basically followed Joseph and Ana-Joel around blindly… which was painfully evident when I was fending for myself. I am almost ashamed of how long it took me to get from Penn Station to where we were staying in Uptown. (Sidenote: New Yorkers just assume that when they say “Oh that’s Uptown/Downtown/Mid-Town” everyone knows immediately where their destination fits in that. Nope. Some of us start instantly singing “Uptown Girl” in our heads the second you mention it and we can’t hear anything else you say or make any reason of your logic. Go ahead, listen to it now and sing along. I’ll be here when you get back.)

But I finally did make it to the Upper East Side, and all of my orientational difficulties were forgotten as I consumed a lot of baked goods from Orwashers Bakery, curtesy of Suzy, my apartment swapping buddy. We switched keys and they headed off to DC, leaving me to head out into a perfect spring weekend in NYC! For a gigantic city covered in concrete, this city sure is in bloom right now.

I couldn’t have been happier this weekend because one of my besties from home was in town for work.  Rachel showed us around some of her favorite places and joined us for some new adventures. She also humored me by being in photos after James had reached his limit.

On Saturday, I decided that the best way to explore the city would be on foot. Because that seemed like a good idea at the time. This meant that we walked from brunch down to Wall Street, up to the 9/11 memorial, up through SoHo and Greenwich Village, to the top of the High Line, then all the way down the High Line. Oh and some exploring in Central Park thrown in for fun. I mean, why take advantage of a very extensive subway system when you could just walk 5 miles?

Plus, walking for hours on end justifies what is always my favorite part of traveling: FOOD.  Oh New York — you are a cornucopia of delicious places to eat. I might have felt sick on the bus-ride home and had to buy gas station carrots to convince my stomach that I hadn’t given up on vegetables but it. was. worth. it. Thank you so much for all the recommendations that you gave from comments,emails, texts, and Facebook messages! This time around we were able to hit up Lady M Bakery, Cafe Habana (if anyone knows how to make THAT CORN at home — TELL ME NOW!!!), Little Cupcake Bakeshop, Cookshop, Schiller’s Liquor Bar (a brunch so good…. that trekked all the way down there both mornings we were in the city), and the Donut Plant. I’m holding onto the rest of your suggestions till next time!

Dear New York: You are overwhelming and big and crowded and I stood out as a pair of red pants in an endless sea of black pants, black boots, black everything. Your subway was under construction at every stop that I needed and there was never a map when I wanted one. Your sidewalks are pretty dirty and your sky is hidden by big buildings who also hide your legendary skyline.

Somehow…. you are still pretty amazing. Till next time, Big Apple.