How do I love s’mores? Let me count the ways. 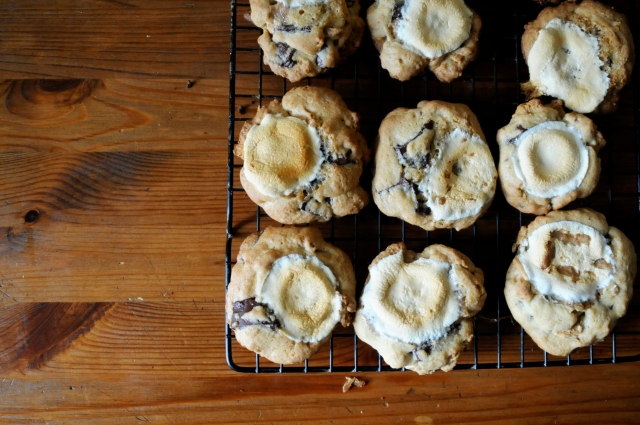 Is there any combination of food more perfect than this?

The answer is no.

Don’t even bother arguing with me on this one. You can keep your fine wine and cheese, your bagel with smear and lox, your perfect steak and potatoes. I will take my s’more, gooey and sticking to my fingers, tasting faintly of smoky summer evenings and crisp fall nights. You can have your delicate pastry and espresso, your fish and chips, your spinach and artichokes. I will take my s’more, composed of the most generic grocery store brand ingredients, transformed into the trinity of outdoor cuisine by the miracle of a fire and a un-bent coat hanger.

I will take a s’more over just about anything . When we went camping last year, only to have our beach camping overshadowed by horrible weather and cold, I ate s’mores about every hour and still felt like I had done all I intended to do in camping. When we returned there were still extra materials so I took to making s’mores over the gas burners. I threatened to do this again on our Colorado trip, much to the dismay of everyone else in the cabin. They threw out warnings like”They will taste like gas!!” and I was all like “Um, so what? I WILL DO IT IF I HAVE TO,” until James and my brothers saved me from myself and built a fire.

On a regular basis I contemplate Big Problems of Life. Things like why is the DC metro so inefficient, why can’t my neighbors master parallel parking (Dear Residents of our street: If you leave four feet of space in front of AND behind your car, you effectively cut in half the number of parking spaces on our street.), why do people think their turn signals are decorative, how come Starbucks discontinues the salted caramel beverages when there are still three months of winter left, and how can I convince everyone to eat s’mores in the absence of a campfire. In regards to the last one, I have spent quite some time on ye old Internet gathering s’mores in alternative forms. I’m sure you have passed many a sleepless night wondering how you could revision the s’more to make it more convenient for your next covered dinner (if you aren’t from the Bible Belt, that’s an awesome dinner party where everyone brings a different sort of casserole, most of your meal is held together by cheese, and deviled eggs always make an appearance), and I’m glad that I can share this list with you and return your repose to its otherwise untroubled state.

Here are some of the best I’ve seen, though I should give the disclaimer that I haven’t actually made all of these yet:

When we were in Banff for our honeymoon last year I found a recipe for s’mores cookies in a newspaper that I ripped out to try eventually. I finally got around to making it a couple weeks ago. I’ll be honest, it wasn’t as good as an actual s’more, but I’m not sure if you can improve on the original. (One exception: wouldn’t it be awesome to make s’mores with Petit Écolier cookies? This stroke of pure genius came to me when I was trying to make s’mores in a poorly lit area and kept dropping the chocolate off the graham. It’s a pretty great idea, I know. Let the record show that I thought of it first when it eventually goes viral and starts showing up on Pinboards everywhere.) But if you aren’t a huge fan of s’mores, then you might find these cookies an improvement. At least, that is how James felt.  In any case, I will say that it is absolutely imperative that you eat these cookies warm or the mallow gets really tough. However, they do reheat pretty well.

S’mores cookies, from an article in some Canadian paper. (I am pretty sure that the person who wrote the article is the food blogger from here.)

Are you all s’mores fans? Know of any other good s’mores desserts?

This entry was posted in Uncategorized and tagged baking, chocolate, dessert, food, photography. Bookmark the permalink.

8 Responses to How do I love s’mores? Let me count the ways.