Paris with my people.

I always find my way back to Paris, and it was almost a given that any trip to Europe had to include it. I had originally planned that we would get a leisurely morning after our overnight flight to have some quality café time before catching our train to Annecy, but the combination of a delayed flight, a momentarily lost stroller, and the reality of how un-leisurely it was getting all our stuff into the city and to Gare de Lyon meant that no, no that did not happen. We settled instead for sitting bleary eyed around coffee in the train station and questioning our sanity, before saying goodbye to Paris for a few days.

When we came back after a couple blissful days in Annecy, we were rested, refreshed, and ready to take on one of my very favorite cities. We didn’t have much of an agenda while there, beyond a list of the must-eat places I always hit when in town and some people that I wanted to see. We mostly wandered around, stopping for a park or pastry every time a certain someone needed a break. We only hit one museum, and in spite of my eternal love for les soldes, I didn’t even step foot in a store beyond the super market. And yet, it was still a perfect time in that perfect city.

//HIS BELLY. We made sure to put our feet on this spot in front of Notre Dame, because they say that it means you will return. I’ve been doing it every visit, and there’s always another one… so I will keep on jostling tourists out of the way to do it.// 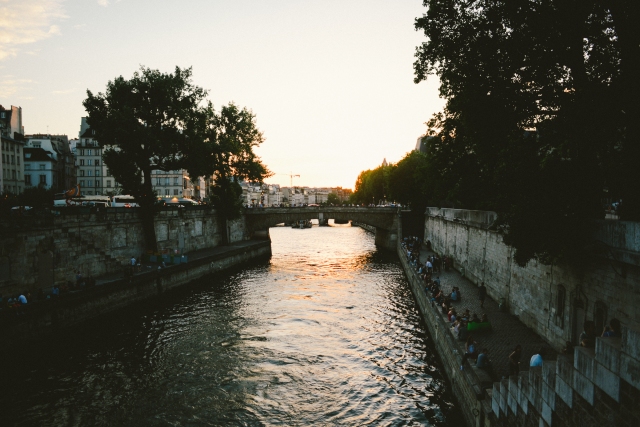 //I get emails every week from people who are going to Paris, or have their mother’s sister’s friend’s hairdresser going to Paris, and they want to know what to do. I have a set email I send with lists of my favorite places, but I mostly just tell people to walk everywhere and give them a list of places to sit. One of the best places is the area around Notre Dame at sunset. You get views like this, lots of street performers, and just a perfect space to people watch.// 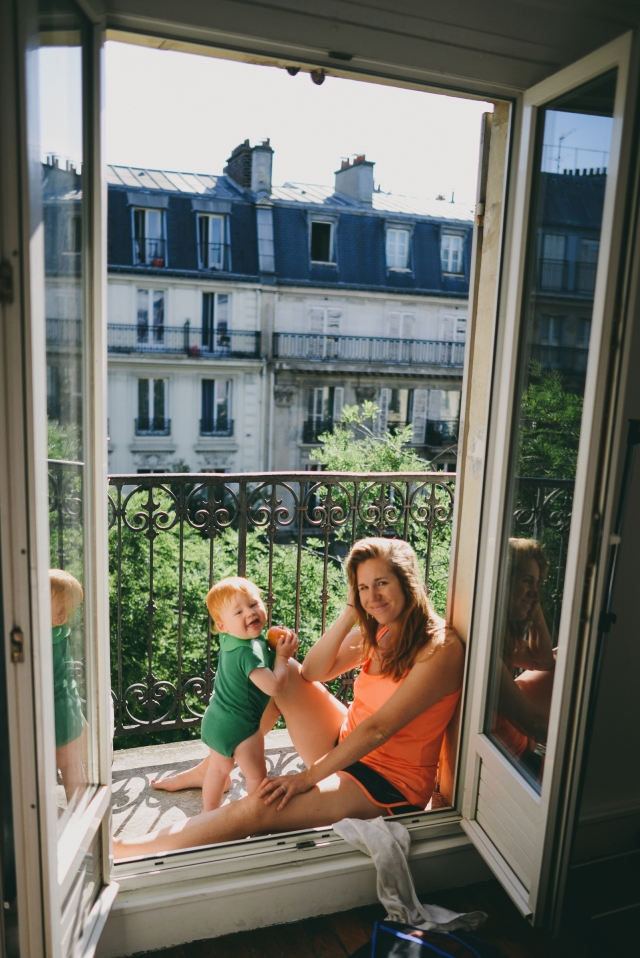 //We did Airbnb’s for both Annecy and Paris and it worked out great. It meant that we could have an actual room for sleeping, so that when Henry went to bed we didn’t just have to sit in the dark. We also made sure to get apartments in both places with tiny balconies. Silly, I know, but it meant that James and I could sit out there and sip wine after Henry was sleeping, continuing our enjoyment of the city all while getting some rest. Our apartment in Paris was perfect, and by that I mean very sparsely furnished (less for a certain ginger gremlin to destroy!), conveniently located (even if not in my favorite area), easy to access, and comfortable.// 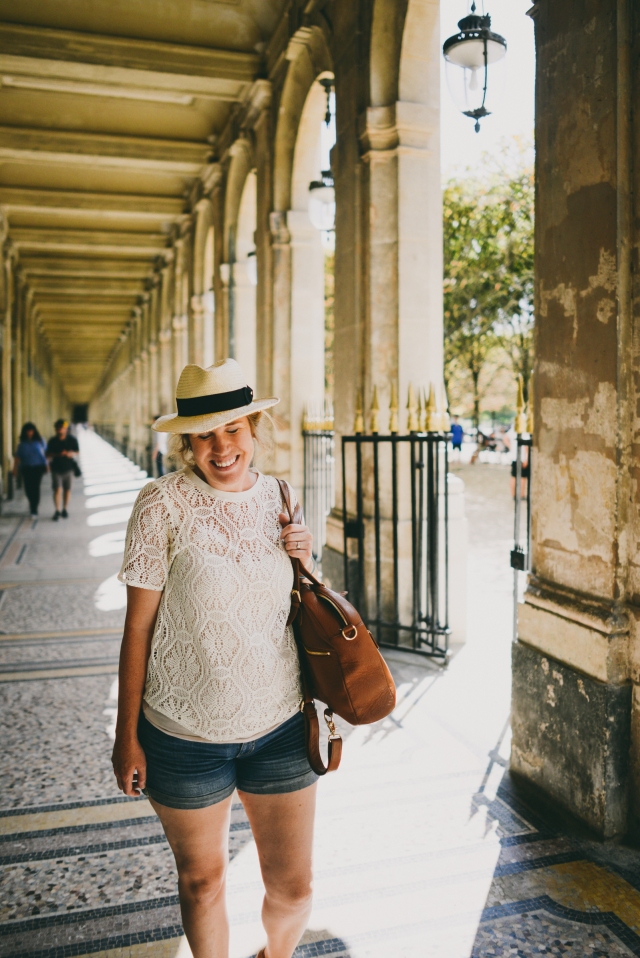 //I have just used an old purse that my SIL was getting rid of for a diaper bag for the past year, but it was a) falling apart and b) can only be worn over the shoulder. I didn’t find any good replacements, so a friend loaned me her Lily Jade bag for the trip and it did not disappoint. So big! So cute! So versatile! I alternated between wearing it as a backpack and as a purse.// 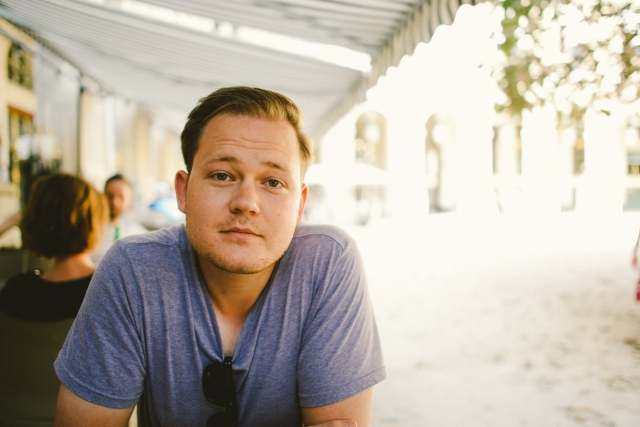 //This cutie. He puts up with soooooooo many pictures, and has learned that it is just easier to let them happen and get it over with quickly.// 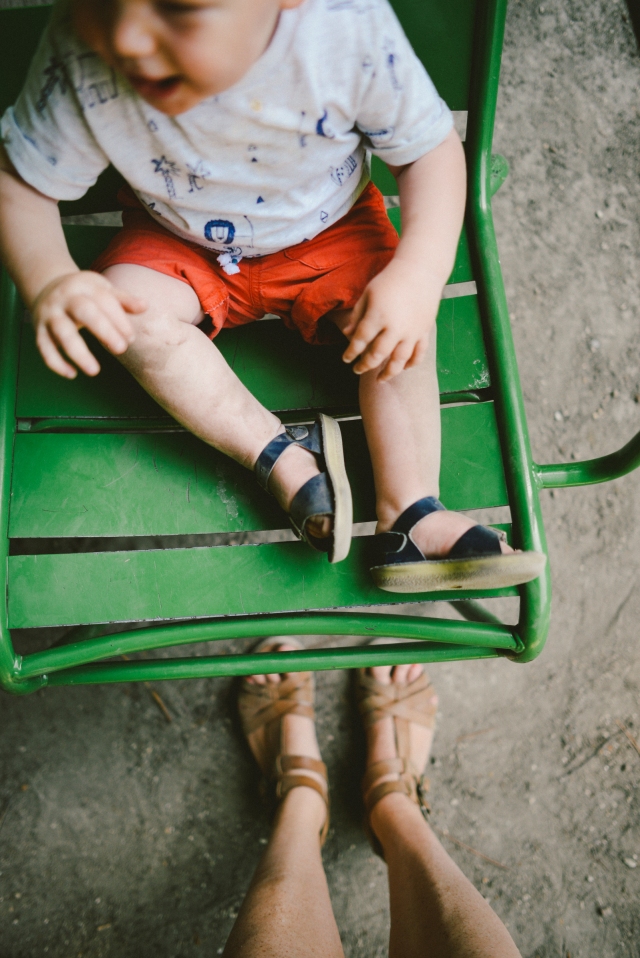 //Henry started really walking in the Tuileries Gardens. He has taken a step or two for awhile, but can crawl so fast that he just seemed uninterested in walking. But there, in the gardens that both James and I love, he started doing that T-rex walk that is the cutest thing ever. It was mostly in response to chasing down his ball, because this boy of ours loves balls. We spent two entire afternoons in these gardens, letting him run around, fall in the dirt, chase his ball, and climb on everything. He was, without a doubt, the dirtiest child in Paris. Also the happiest.// 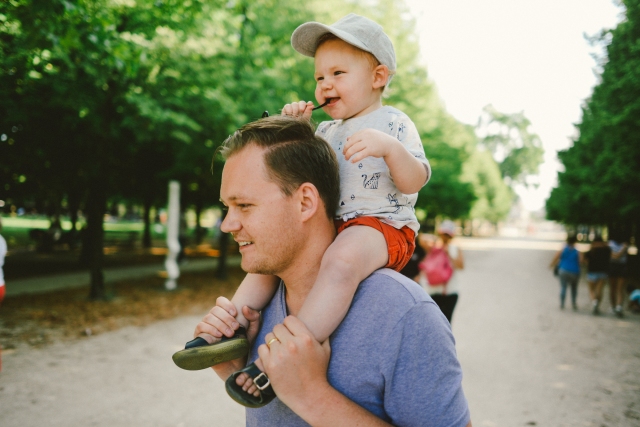 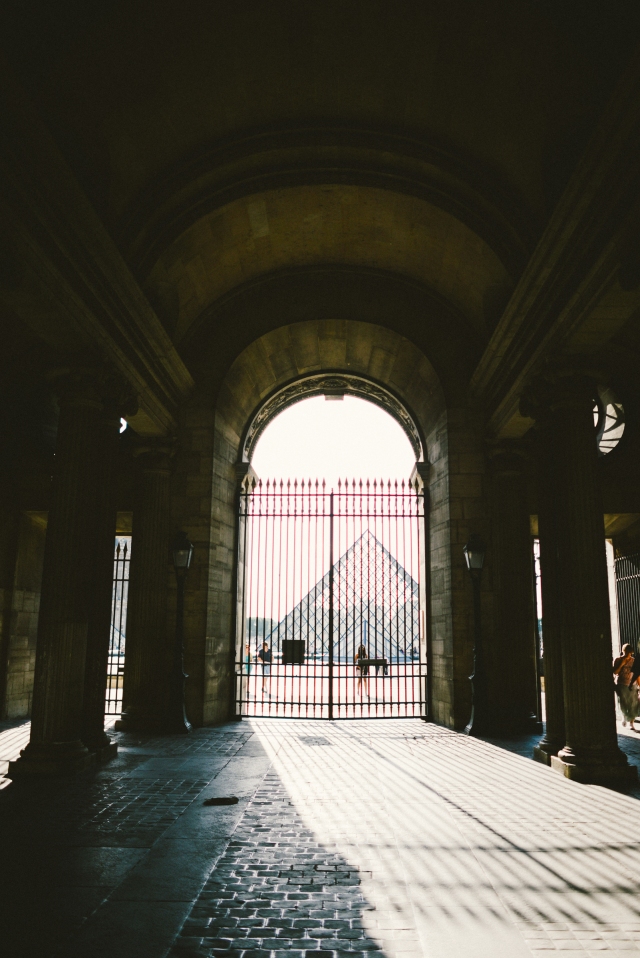 //Another favorite spot to stay awhile is the Cour Carré around the Louvre. There are almost always amazing musicians in this passage, and experiencing that with Henry was one of the things I was most anticipating. Nothing is more magic than the music of a cello echoing through this space. // 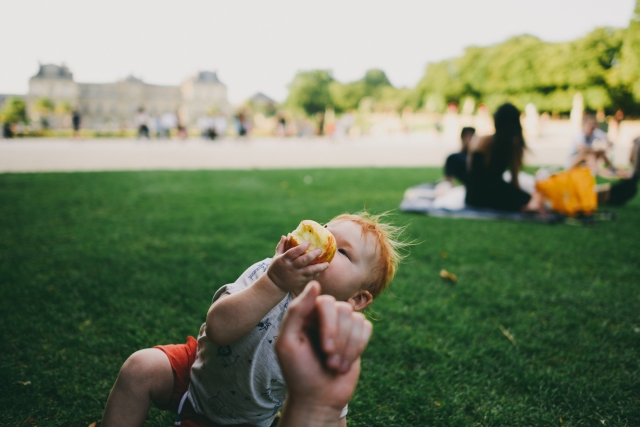 //This kid put up with SO much eating in cafés, but he was definitely thrilled when we skipped tables and had picnics in the park. He carried that apple over to every group around us, disrupting their picnics to giggle and try to clink his sippy cup against their uplifted glasses of wine. He hammed it up, reveling in the attention, and almost went home with several other families before we dragged him away. I used to pass through the Luxembourg Gardens every day when I studied abroad in 2007, and I came regularly when I lived beside them in 2009 and 2010. Never would I have imagined that I would get to picnic in them with my extroverted ginger baby.// 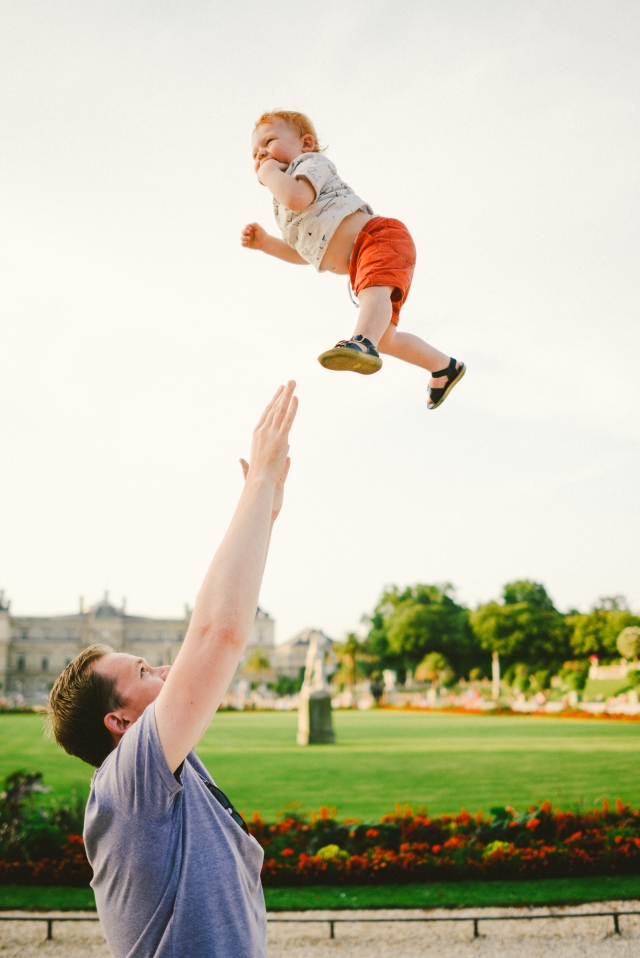 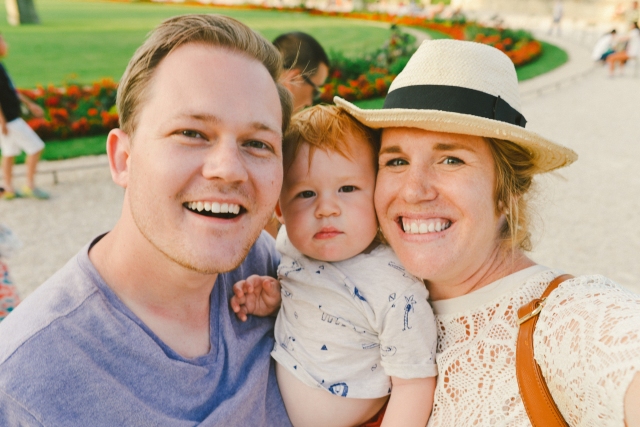 //Again, THAT BELLY. Also that mean-mug…. someone was not impressed with family portrait attempts.// 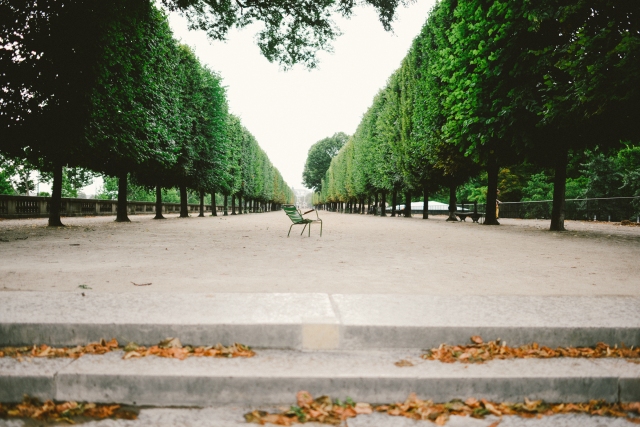 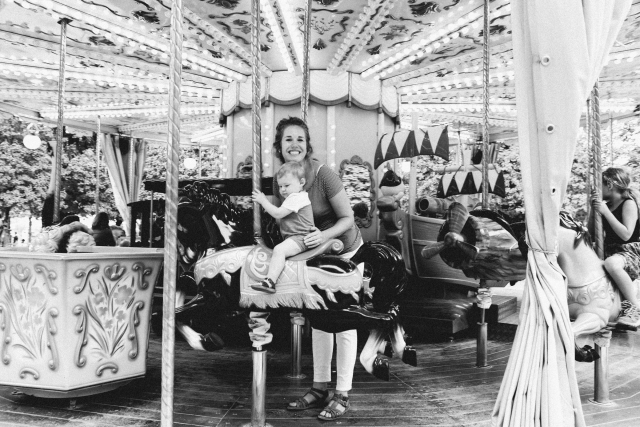 //Ok, let’s talk about this Saint-Honoré Rose Framboise. It’s one of the treats I crave in France (along with butter with full chunks of sea salt crystals slathered over warm baguette, the cheap generic brand museli from Dia, pain au raisin, duck breast, croque madame, and the hot chocolate served with big bowls of whipped cream), but Ladurée had sold out of the individual sized ones. I shrugged and just informed them that I would have to buy the full sized one and it took the woman a second to realize that I was not joking…

… because I Do. Not. Joke. about the Saint-Honoré Rose Framboise. James and Henry only ate a couple bites, but my friend Emma and I nobly ate almost the entire thing in one sitting. I have no regrets. // 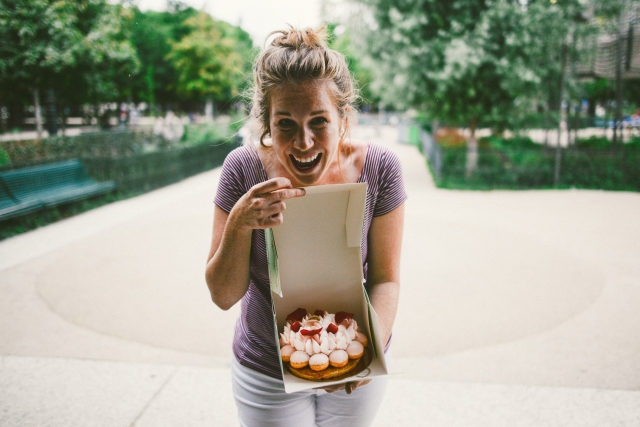 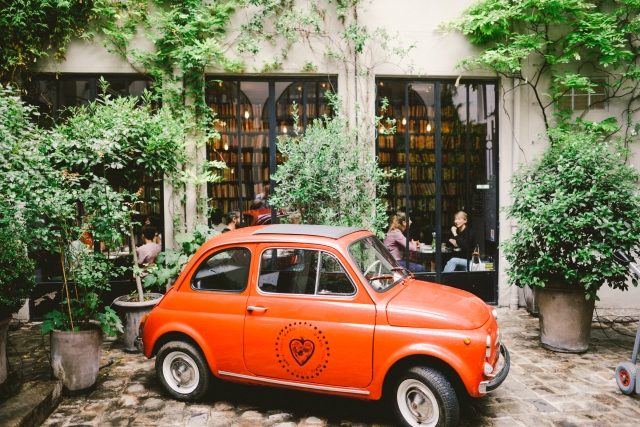 //We stopped by the much-hyped Merci, and honestly, I was not overly impressed. It was so pretty, but not really baby friendly. I don’t hold it against them, but it meant we didn’t stay too long, heading instead to… 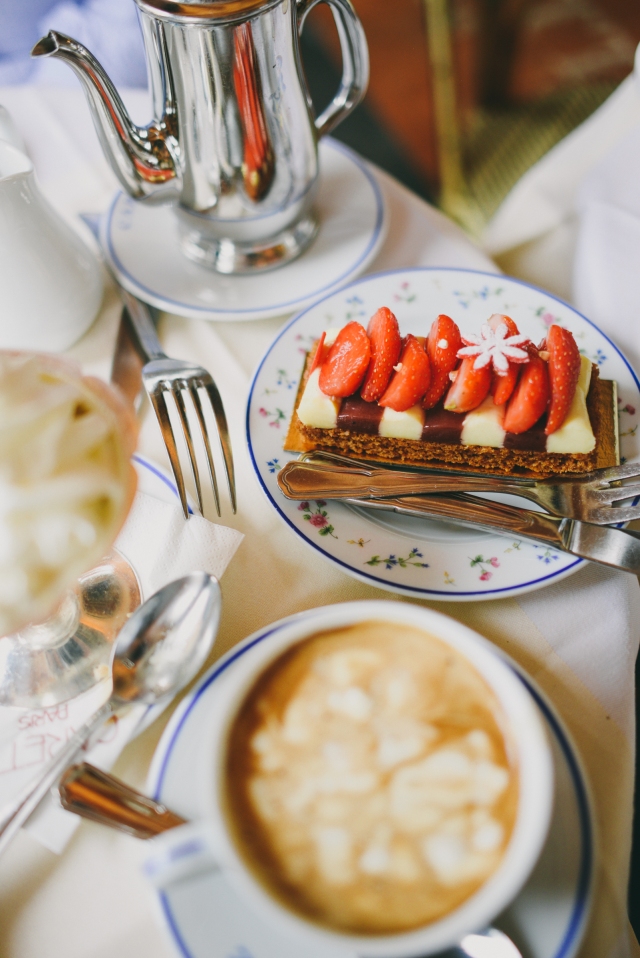 …Carette. If I only had one afternoon in Paris to spend at one café, it would be this one. Place des Vosges is one of my favorite places in the whole city, and I love the inside-outside vibe of eating in the colonnade. Plus, their croque-madame is delicious, their hot chocolate accompanied by a mountain of whipped cream, and their pastries divine. They were also the ONLY place of anywhere we ever went in France to have a high chair, so, bonus points. (More Parisian tea rooms I love here, and wayyyyy old school here,  if that’s your thing. If not, we probably aren’t actually friends.)// 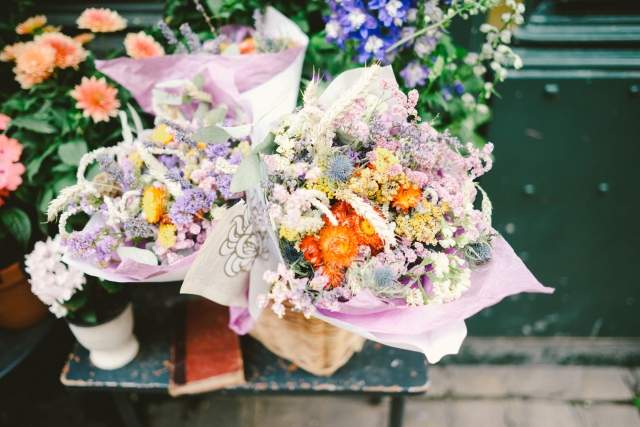 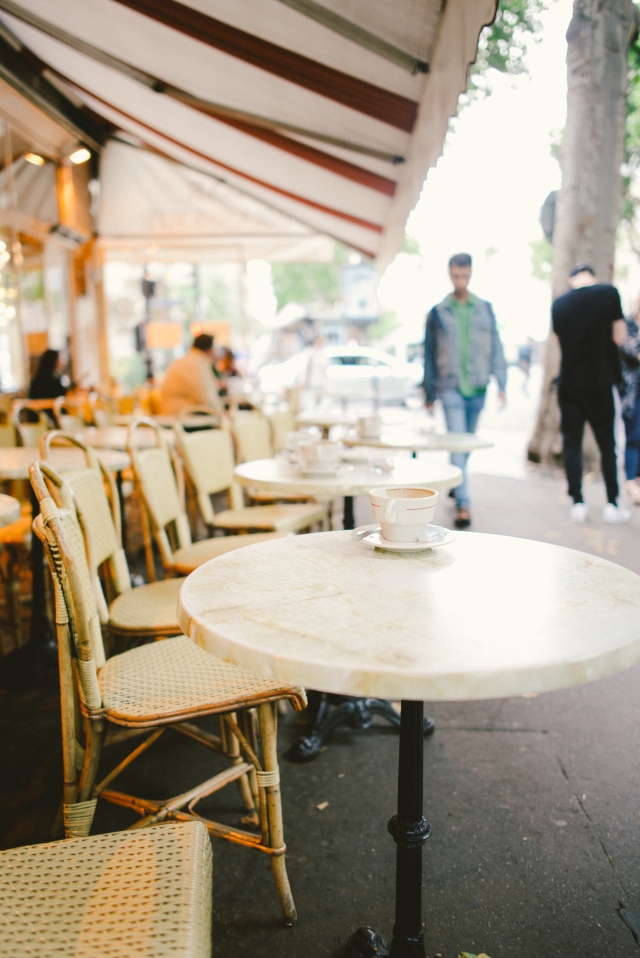 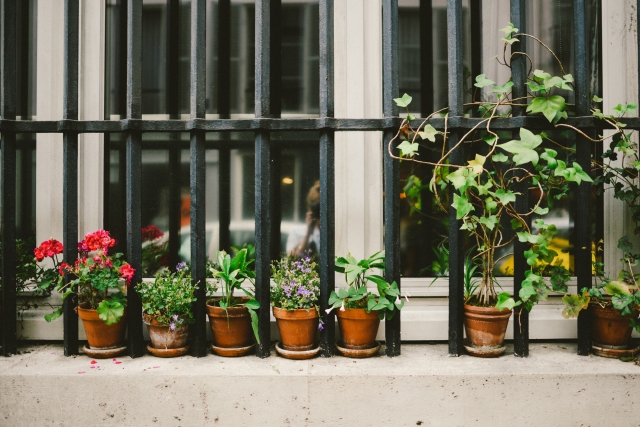 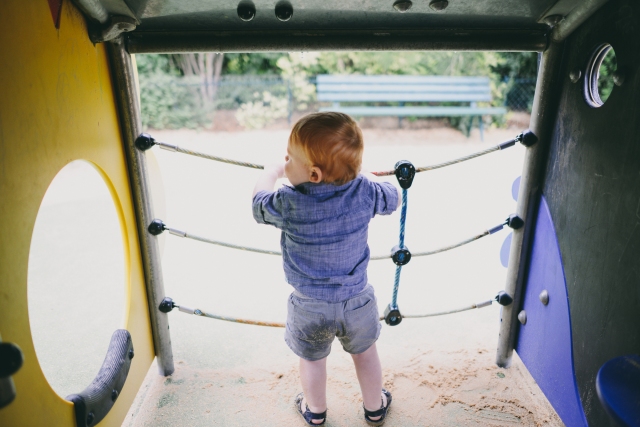 //It was hot the entire time in Annecy and the first half of our time in Paris. But close to the end, we had some crazy summer storms in the middle of the day. One such storm blew up when we were near the Eiffel Tower. As there is nothing near there to offer shelter, we waited it out in a children’s play structure, which Henry LOVED. We also let him play in the wet sand… which led to a screaming baby as we stripped him down and tried to clean wet sand off him with wipes. Not our finest moment. But maybe one of the funniest family memories from the trip.//

Paris will always be impossibly precious to me for so many reasons. It’s the place where I learned so much about myself, where I had my first post college job, where I navigated friendships and logistics and faith in another language. It’s where I told James I loved him for the first time, and where so many other memories are inscribed in every detail of the city. It’s been my constant in so many ways for so long. I will never stop wanting to go to Paris, even if visiting it with a baby in tow showed me that it is not as easy a destination as many places, and that many things I love doing their are solitary pursuits. But now, now I have a whole new catalogue of memories of my favorite people, in one of my favorite places. It gets to be the site of Henry’s first steps and of important discussions between James and me. It was so good to our family and that just makes me love it all the more, even as it revealed new difficulties.

Till next time Paris.

PS: Should you want more Paris posts other than the ones linked throughout the captions above, are some more:  Parisian realism / Impressions / Sunsets from where I used to live / How to spend 2 days in Paris / Why I never look French / All the blue doors / Fancy city, simple food / More random pictures / Parisian Maps / I wish I could give you Paris / Still more random pics / Good Parisian Memoirs / Paris by the colors / And still more random pictures

1 Response to Paris with my people.